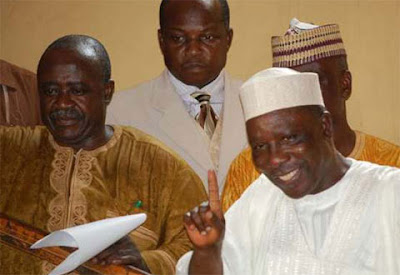 The Secretary to the Kaduna State Government (SSG), Mr. Waje Yayok, who was kidnapped in the state 10 days ago has been re-united with his family and colleagues after the government allegedly paid N20 million ransom to his abductors.

The government however said nothing was paid and that the kidnappers released Yayok when they realized that government was not ready to play ball.
The Deputy Governor of Kaduna State Mr Patrick Yakowa and the State Commissioner for Information Alhaji Saidu Adamu with the Kidnapped SSG Mr Waje Yayok(right) at the Sir Kashim Ibrahim House, Kaduna after his release in Port-Harcourt: Photo by Olu Ajayi.

Yayok had arrived Government House in an ash coloured 406 Peugeot Saloon car with registration number Abuja BF 507 YAB at about 12.58 pm and was taken straight to the Deputy Governor’s office where he briefed senior government officials, security officials and leadership of the ruling people’s Democratic Party (PDP) on his experiences while in captivity.

About two and a half hours later, the Deputy Governor, Mr. Patrick Ibrahim Yakowa, re-appeared with the SSG, the Commissioner for Information, Alhaji Saidu Adamu, and the Special Adviser to the Governor on Media and Public Affairs, Alhaji Umar Sani, and told newsmen that Yayok would answer some questions after Alhaji Sani had read a prepared statement on the kidnap saga.

However, this was not to be as Yayok only thanked God, the government and people of the state and the press for putting pressure on his kidnappers which eventually led to his release.

Initial report was that Yayok was released by his kidnappers in Port Harcourt would travel by road to Kaduna but the government said that the SSG was freed in Warri, Delta state, and later flown to Abuja before being driven to Kaduna.

Earlier in the morning, the Anglican Bishop of Kaduna Diocese, Bishop Idowu Fearon, had addressed a press conference where he said that Yayok’s kidnap was political.

He said that when kidnapping started in the country, the north regarded it as a south-south affair but stressed that Nigerians should know that the country is now like a village and that what happens in one area would affect the other areas.

The statement by Sani said, “gentlemen of the press you will recall that sometimes ago to be precise on Tuesday 22nd September 2009, after much inquiries about the whereabouts of the SSG from Members of the Public, we issued a statement stating that the Secretary to the State Government (SSG) was on official assignment to the southern part of the State.

“Subsequently, the next day after fruitless effort to locate his whereabouts, he was declared missing by the Kaduna State Police Command.

“Thereafter, the security agencies intensified efforts to locate him and his whereabouts.
“Their efforts paid off after frustrating the assailants who were later to be identified as abductors of the SSG for ransom. The fact that no ransom was paid and the toll was telling on them frustrated their efforts and led them to the release of the SSG.

“The SSG was taken to Warri in Delta state where he was held hostage for a better part of the time he was held captive.

“The combined efforts of the SSS and the Police gave the abductors sleepless nights and they felt that the security agencies were closing in on them and that soon the noose will be tightened around their necks.

“The only option left was for the immediate release of the SSG who is currently in our warm embrace.

“At this juncture, it is pertinent for us to dispel the rumours going the rounds that the SSG was abducted in open places and to state that the incidence took place at the junction of Studio 40-40 along Barnawa-Narayi junction very close to the residence of the SSG.

“He was to proceed on official assignment the next morning to the southern part of the State when some uniformed men fully clad in Army camouflage numbering about ten (10) abducted himself and four other vehicles including a Toyota Camry, a Jeep, the vehicle of the SSG an End-of- Discussion and a Mercedez Benz that were forced on a convoy to drive and proceed straight to Delta State that night.

“It should also be noted that the SSG was a victim of circumstance and that the operation was not targeted at him or any agent of the State Government.

“He was only discovered to be an SSG along the way courtesy of his identification card. He was abducted and was headed straight to Delta State where he was until his release. He was received in Benin and returned to Kaduna by our security operatives notably members of the SSS hale and hearty.”

Soon after Alhaji Sani had read the statement, Mr. Yayok was sandwiched into the Deputy Governor’s official jeep and both the SSG and Mr Yakowa drove to his house.