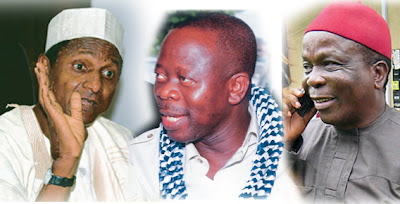 The Academic Staff Union of Universities yesterday suspended the strike action it embarked upon since June 22, for two weeks, “to enable a cordial atmosphere for the peaceful conclusion of negotiations” between it and the federal government.
In a swift reaction, the Minister of Education, Sam Egwu expressed optimism that the decision would eventually pave the way for lasting peace in the sector.
Announcing the suspension at the Imo State University, Owerri, ASUU president, Professor Ukach-ukwu Awuzie on behalf of its National Executive Council said the strike action would not have taken place if the federal government had done what was expected of it initially.
He recalled that the strike was inevitable following the refusal by the government to sign the agreement it “willingly, through the process of collective bargaining, entered into with the union after two and half years of negotiations.”
The ASUU president said: “If there was mutual confidence and understanding between ASUU and government, there would have been no strike.
“ASUU realizes the impact of the strike on students, and is yielding to the clarion calls by concerned Nigerians, while being optimistic that the federal government would not relent in her agreement with ASUU.”
The ASUU president stressed the need for the state governors to be involved in what goes on within the systems as they were misinformed on the whole situation, “hence they misunderstood the terms of the agreement reached.”
He added that state universities must attain minimum standards of whatever the federal government agrees with ASUU.
On the issue of public umbrage towards the ASUU action, Awuzie observed that such would not have been the case since the union did not act alone and “both parties were involved in the action, even though ASUU was on the right track.”
Awuzie called on the federal government to as a matter of urgency to conclude agreements with other unions in the university system so that the universities can return to proper operations “and to avoid any actions that are capable of destroying the existing harmony among the unions on the campuses.”
He commended the intervention of President Umaru Yar’Adua through the Edo State governor, Comrade Adams Oshiomhole.
The union also acknowledged the efforts of the president, Nigeria Labour Congress, Comrade Abdulwaheed Omar; the Speaker, House of Represe-ntatives, Hon. Dimeji Bankole; Nigerian students “and other labour movements, including the Trade Union Congress, civil society organisations, the Education Rights Campaign and various students’ organisations.”
“We also thank the legislature, media organisations and Nigerians generally for their solidarity and support,” Awuzie said.
Egwu in his reaction stated: “I am delighted and hopeful that we have, alongside Oshiomhole achieved what we have now, which is the agreement with ASUU to call off the strike for two-weeks and for renegotiations to begin.”
Egwu noted that the prolonged strike and its attendant consequence of keeping university students at home and the long term effect on the university system, compelled the two sides to re-appraise their positions.
The minister explained that “while the federal government retains the university autonomy granted recently, the grey issue of salary increase remains at 40 per cent pending renegotiations through collective bargaining with the union.”
On the insistence by ASUU that the federal government signed an agreement with it, Egwu said: “if that is the case, such an agreement would imperil the state universities.
“What we have agreed to do is for the Pro-chancellors rather than university councils of all federal universities should sign the agreements on behalf of government.”
While regretting what he described as the avoidably prolonged strike action, Egwu promised: “We are putting this behind us and ensuring that this doesn’t happen again because of the destructive effects of these recurring prolonged strike actions.
“We are hopeful that this latest respite would eventually lead to a final resolution as we are determined to evolve long term solutions that would return our higher institutions to global standards.”
ASUU last June embarked on an indefinite strike to protest the failure by the federal government to sign the report of the Gamaliel Onosode-led committee set up in 2006 to re-negotiate the 2001 agreement between the union and government.
The strike continued as negotiation between the government and ASUU broke down following the government’s insistence that it could not sign any agreement that would be binding on state governors.
As a result, negotiations were discontinued until recently when President Yar’Adua invited Oshiomhole to intervene, with a view to resolving the dispute amicably.
Oshiomhole, thereafter met with the representatives of the union and government on October 3 at National Unive-rsities Commission (NUC) secretariat in Abuja.
Meanwhile, a Vice Chance-llor of one the federal universities, who spoke on condition of anonymity said the two-week suspension was too short to invite the students back to school.
“We are hopeful that the matter will be resolved quickly, but this is uncertain. The time is too short for us to invite the students back to school,” he said.
Meanwhile, the federal Government has reached a working understanding with the Senior Staff Association of Nigerian Universities (SSANU), Non-Academic Staff Union of Universities (NASU) and the National Association of Academic Technologists (NAAT), which were also on strike.
Minister of Education, Dr. Sam Egwu, who addressed newsmen at the end of a meeting between the unions and government officials, said government had no intention of treating the issues concerning university unions separately, adding that he received the permission of the president to discuss with all the unions – ASUU, SSANU, NASU and NAAT.
Source: thisdayonline.com
JOIN THE FASTEST GROWING NIGERIAN FORUM