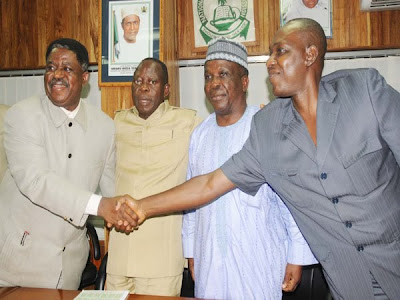 Governor Adams Oshiomhole of Edo State has said the Federal Government and the Academic Staff Union of Universities have reached an agreement on how to quickly resolve the ongoing strike by university lecturers.

Mr. Oshiomhole spoke in Abuja on Saturday at a press briefing shortly after a meeting between the government and the union.

He said the union would hold a National Executive Council (NEC) meeting and announce the suspension of the strike in the shortest possible time.

“Both parties have all agreed that once ASUU suspends the strike, the remaining issues would be resolved in a very short time — not more than a week, so that the university system can return to normalcy,” the News Agency of Nigeria quoted the governor as saying.

“We have had an exhaustive discussion with both government and ASUU and all the key issues have been well taken care of,” Mr. Oshiomhole said.

He said both parties had reached an understanding that the union would call off the strike any moment.

The union’s President, Uwazie Ukachukwu, said that the suggestions made at the meeting would be presented to its national executive committee for consideration “within three days”.

In his remarks, the Minister of Education, Sam Egwu, said all the parties involved in the dispute had made progress towards a resolution.

Mr. Egwu commended Mr. Oshiomhole for his intervention in the matter.

He also thanked the union’s leadership for its show of understanding, expressing confidence that the dispute would be permanently resolved.

“I believe that after this period, we shall witness rapid growth and development so that the desires of ASUU, that of government and all Nigerians would be achieved,” Mr. Egwu said.

“It is also my belief that at the end of every crisis, there must always be a positive development and that is what would happen to Nigeria in this situation.”
Source: 234next.com
JOIN THE FASTEST GROWING NIGERIAN FORUM