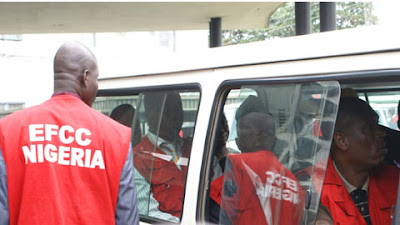 CHAIRPERSON of the Economic and Financial Crimes Commission, EFCC, Mrs. Farida Waziri, yesterday, led a team of 80 operatives to Lagos to recover the non-performing loans granted some Nigerians by the four banks that were recently slammed by the Central Bank, CBN, for non-compliance to banking principles.
The four banks are Bank PHB Plc, Spring Bank Plc, Equitorial Trust Bank Ltd and Wema Bank Plc.

It was reliably gathered that following the release of the debtors’ list which includes such notable names like former Vice President Atiku Abubakar, former governor of Lagos State now Ambassador to South Africa, Brigadier-General Buba Marwa (rtd), Chief Tony Anenih and other Nigerians, the anti-graft agency’s boss had no choice than to lead the team herself.
EFCC 80 operatives in Lagos to recover the non-performing loans granted some Nigerians by the four banks

EFCC spokesman, Mr. Femi Babafemi, who spoke to our reporter on phone confirmed that the commission’s chairman was in Lagos and met with operatives over the issue.

It was further gathered that arrests will likely be made from today while the operatives will use the weekend to round up those who may fail to come forward personally to make commitments towards the recovery of the debts.

The source explained that the EFCC boss was more concerned with recovering the non-performing loans so that they could be returned to the banks rather than arrests and detentions.

It could be recalled that the banking sector had come under the sledge hammer of the apex bank all in a bid to sanitise the sector.

Former Vice-President Atiku Abubakar, yesterday, admitted owing some money to a bank and pledged to immediately liquidate it.

The former Vice-President in a statement issued by his media office explaining the circumstances surrounding the mention of his name in the list of debtors of non-performing loans by the Central Bank said the loan was linked to an “old dormant account”.

He said that no attention had been paid to the matter by his staff.

“I have since resumed talks with the bank on the issue and the matter will be resolved. We will pay the outstanding sum as soon as it is agreed upon,” he said in the statement.

The former Vice President also expressed his full support for the on-going reform of the banking sector as part of measures to stimulate economic growth.

He expressed gratitude to his admirers and supporters who had called him since the publication of yesterday.

On his part, erstwhile chairman of the Board of Trustees of the Peoples Democratic Party, PDP, Chief Tony Anenih, has petitioned the Economic and Financial Crimes Commission, EFCC, alleging a N2 billion fraud under his name unknown to him.

Anenih, in a statement yesterday disclosed that he had discovered that yet unknown elements had linked his name as a Director and shareholder of Mettle Energy and Gas Ltd through which platform he supposedly obtained a N2.065 billion loan from Spring Bank Nigeria Plc.

Denying any linkage with the company, Chief Anenih in a statement he signed last night also affirmed that he had never entered into any branch of Spring Bank in his life.

He said: “This morning (yesterday) as early as 7 O’clock, telephone calls from friends and members of my family drew my attention to the list of bank debtors published by the Central Bank of Nigeria (CBN) in most of today’s (yesterday) national dailies and on the CBN website.

“I read most of the Newspapers and I was deeply embarrassed that my name should appear as owing Spring Bank N2.065 billion. The CBN in the same publication stated that I am a Director in a company called Mettle Energy and Gas Ltd.

“In the last 8 hours, I have carried out investigations and I can firmly say that records in the Corporate Affairs Commission (CAC) show that I am neither a Shareholder nor a Director in Mettle Energy and Gas Ltd. Spring Bank records including the Memorandum and Articles of Association, form CO7 and Board resolutions with the Bank do not have my name in any of the documents,” the statement added.

Not wrong to owe — Ugbo

Also reacting to the alleged debt to the tune of N29.5 billion owed to Afribank Nigeria Plc, Mr. Emmanuel Ugbo, Managing Director, DEAP Capital & Trust Plc, said “There is nothing wrong owing money and there is no law that states somebody should not owe.”

He commended the Central Bank of Nigeria, CBN, for the effort at recovering debts owed to banks but cautioned the apex bank to do a thorough job of the list of debtors by ensuring that people who borrow money by following due process are not treated in the same way with those who borrow money fraudulently.

Mr. Peter Amah, Head of Research and Corporate services, DEAP Capital, who reacted on behalf of Mr. Ugboh said, “Owing money is not a crime, but when somebody refused to pay it becomes a crime. Debtors who owe and do not want to pay is not good because other people who need money would not be opportuned to get money from the bank.”

However, he said, “The money our company is owing is a performing one. We followed due process in getting the money from the bank and we are servicing it. It is not a good thing for CBN to be publishing list of debtors because no economy can survive without credit from the banks. The banks are in existence to lend money to people or corporate entity that needs it.”

In his reaction to an alleged indebtedness to the tune of N4.47 billion to Oceanic Bank, Oba Frederick Akinruntan, Chairman of Obat Oil & Petroleum Company, said, “The N4.47 billion debt being alleged has been duly paid up, and I am currently not indebted to any bank.”

He noted that the debt was earlier published during the sacking of the Managing Directors of the first five banks which failed the audit test and wondered why it is still being brought up now after he has ensured a prompt payment of the debt.

“We have since paid up the money, and we are no longer indebted to either Oceanic or any other bank as the debt being talked about has been paid up.”

Also, former Senator from Yobe State, Alhaji Usman Al-Bashir, has said that the inclusion of his name in the list of debtors was politically motivated.

In the debtors’ list, he was quoted as Chairman of Savannah Airlines that owes Unity Bank N574m. But reacting Bashir, said, “I do not own anybody anything anywhere in the country”.

Senator Al-Bashir pointed out that this was the second time his name was being dragged into the debtor controversy without evidence. “The first time was in 2007, on the eve of my gubernatorial ambition when someone alleged to owe Bank of the North N14m and the EFCC went after him”.

of Savannah Airline Ltd, Abdul Ringim also affirmed that, though Bashir was the chairman of the Savannah Airlines that was indebted to the defunct Bank of the North to the tune of N14m but “the airline was a limited liability company”.
Source: Vanguardngr.com
JOIN THE FASTEST GROWING NIGERIAN FORUM