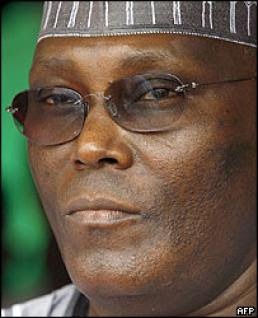 There are indications that former Vice President and Action Congress(AC)presidential candidate in the 2007 poll, Alhaji Atiku Abubakar has finally dumped the party.

There are indications that former Vice President and Action Congress(AC)presidential candidate in the 2007 poll, Alhaji Atiku Abubakar has finally dumped the party.

Daily Champion gathered that while Abubakar has not officially written the party to inform it of the development, he has confided in close associates and aides that he has made up his mind to leave the party.

But the media consultant to the former, vice president, Mallam Garba Shehu, denied knowledge of such development. He said: “His Excellency he has not told me that he has left AC. To the best of my knowledge he is still a card carrying member of AC.”

Only last recently, Abubakar with former head of State and Presidential candidate of All Nigeria Peoples Party (ANPP) Maj-Gen Muhammadu Buhari and former governor of Sokoto State and presidential candidate of Democratic Peoples Party (DPP), Attihiru Bafarawa met in Kaduna and resolved to float a new party. The meeting which took place at the home of Buhari agreed that the new party merge with some parties run by southern politicians to give it national outlook.

Before then, Abubakar has consistently been linked with the funding of Mega Summit Movement run by elder statesman, Pa Anthony Enahoro, former Secretary to the Government of the Federation (SGF), Chief Olu Falae and former Minister of the Federal Capital Territory (FCT), Gen Jeremiah Useni(rtd). It is expected that the movement will metamorphose into a mega party.

A source close to Abubakar revealed that he will formally write to AC on his new decision between now and end of November. “Atiku will notify AC between now and November. He is waiting to see to the completion of the ongoing effort to register our new party,” he said

On why Atiku is dumping AC he said: “The AC matter is a forgone issue. Some people felt that it is better to hijack the party and put their name tag on it. His Excellency does not see any reason to start fighting with them. Instead he feels that it is better to form a broad based party, and nurture it to maturity.

“It will be difficult to stay in AC and win the presidency. He wants a party that will have influence in all part of Nigeria; a party that can checkmate the Peoples Democratic Party (PDP) and give people what they want. You and I know that AC cannot achieve that for any serious minded presidential aspirant. 2011 will not be like 2007, he does not want to leave any stone unturned. Some leaders in AC are begging him not to leave the party; to continue to play the leadership role he is playing.”

Efforts to reach the national publicity secretary of the party, Alhaji Lai Mohammed failed. But Mohammed had in the wake of Atiku’s attempt to rejoin PDP said the party would not lose anything if he decides to leave.

Daily Champion reveals that all has not been well between Abubakar and the party after the 2007 election. The situation led to former governor of Lagos State and AC leader, Asiwaju Ahmed Tinubu refusing to go to airport to welcome him in 2007.

Atiku later made vigorous effort to dump AC and rejoin PDP. He visited his estranged former boss, Chief Olusegun Obasanjo at his Ota Farm in a bid to go back to the party. But the action caused a stir in the polity and enraged AC leaders who described it as a wrong step.
Source: champion.com.ng