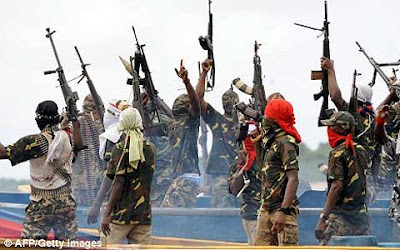 Nigeria’s main militant group the Movement for the Emancipation of the Niger Delta has declared an indefinite ceasefire after negotiations with the presidency.

In a press release signed by MEND spokesperson Jomo Gbomo, the group said that their leader Henry Okah conveyed a ‘welcome shift’ from the federal government after he met with President Yar’Adua on Tuesday.

According to the group, “government has expressed the readiness to engage in serious and meaningful dialogue with every group or individual towards achieving a lasting peace in the Niger Delta”

The group therefore declared an indefinite ceasefire from the 25th of October to enhance the dialogue between the government and the Aaron team which the group has selected to negotiate on behalf of MEND for peace in the oil rich region.

Quoting the bible verse of Ecclesiastes 3: 1-8, the group said that “there is a time for everything, and a season for every activity under heaven… a time to tear and a time to mend “ The group also announced the withdrawal of Annkio Briggs, the liason officer of the Aaron team from the team.

The exit of Ms Briggs was by mutual consent according to the release. She has been replaced by Amagbe Denzel Kentebe.

MEND had threatened to resumes its hostilities against the Nigerian oil industry and the Nigerian armed forces on October 16, 2009 after the expiration of a 60-day ceasefire declared on the 15th of July 2009.
source: 234next.com