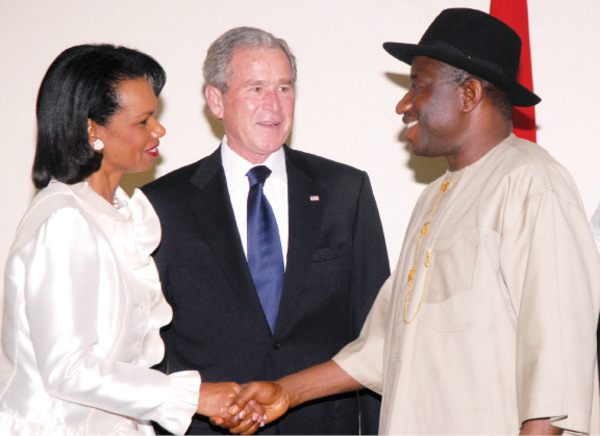 Nigeria’s Acting President, Goodluck Jonathan, yesterday evening in Abuja secured the support of the former President of the United States, George Bush who assured him of the world’s support in making his job a success. Mr. Bush and his entourage were in Nigeria for the ThisDay Nigeria at 50 awards.

Mr Bush who visited Mr Jonathan at his Aguda House official residence in the presidential villa, congratulated his host, noting that though the circumstances that brought Mr Jonathan to office were unexpected, there is every chance that the Acting president will succeed. “Sometimes in life, the unexpected happens,” he said.

The visit followed Saturday’s visit to Mr Jonathan by former prime minister of the United Kingdom, Tony Blair who had praised Mr. Jonathan for ‘wisely steering the ship of state amidst turbulence.’ At a closed door meeting later, Mr Blair had also promised the Acting President of UK support in resolving the Niger Delta crisis and the Power problems in the country.

In his message, Mr Bush said, “We wish you all the best, even though we know it is not an easy job. With God’s grace and the support of your team, you will succeed.”

The Acting President assured his guests about the commitment of the Federal Government to conduct a free and fair election in Nigeria in 2011. He said his government will work towards ensuring that the electoral process is transparent and reflects the wishes of the Nigerian people.

“I can assure you that come 2011, Nigeria’s elections will be credible. We will do everything possible to overhaul the electoral process and leave a lasting legacy in our political history,” he said.

We are not terrorists

Mr Jonathan also used the occasion to call on the American government to consider de-listing Nigeria from countries of interest in the global war against terrorism.

Incidentally, Mr Bush launched the global war on terror during his time as president of the United States of America.

“Terrorism is alien to Nigeria,” Mr Jonathan said. “Nigeria and US are strategic partners for global peace and development.” He also thanked the US government for its concern over the health of President Umaru Yar’Adua who is currently undergoing treatment in a Saudi hospital.

Mr Bush was accompanied on the trip by former US Secretary of State, Condoleezza Rice and US Ambassador to Nigeria, Robin Sanders. On the Nigerian side were the Minister of Foreign Affairs, Ojo Maduekwe and his solid minerals counterpart, Diezeani Allison Maduekwe.

The presidency at the weekend, went on the offensive by accusing a former south-south governor as the arrowhead of those opposed to Mr Jonathan’s ascension to the office of Acting President.

The Senior Special Assistant on Media to the Acting President, Ima Niboro said the former governor, whom he did not name, was unhappy with the transfer of power to Mr Jonathan and has therefore joined other anti-Jonathan forces to rubbish the image of the Acting President.

“The Presidency is aware that they have set aside a huge war chest in billions of naira to bring the Jonathan Acting Presidency to disrepute by any means possible,” he said, adding that those behind the planned attack had stored up sensitive documents collated from financial transactions of the Acting President from his days as the governor of Bayelsa State till date, and would be releasing the documents to the media on weekly basis.
SOURCE: 234next.com