The Economic and Financial Crimes Commission, EFCC, has placed all serving ministers on a 24-hour surveillance ahead of the investigation being conducted by the Presidential Projects Monitoring Committee into the various projects embarked upon and executed in the last two years.
An impeccable source at the commission revealed at the week-end that the anti-graft agency had mobilized operatives to monitor the movements of the ministers in a bid to forestall the possibility of their jetting out of the country.
According to the top EFCC operative, the action is a proactive one as, in the past, top government functionaries had suddenly vanished before findings are concluded by committees set up to carry out such a verification exercise of this nature.
The source explained: “We are not resting on our oars because we know very well that some of these ministers are neck deep in corruption and any attempt for us to allow a little laxity they will capitalize on it and junket out of the country making it very difficult for us to perform our tasks.
“We know the ministers that took laws into their hands and helped themselves with our commonwealth due to President Umaru Yar’Adua’s absence and turned their ministries into personal properties awarding contracts indiscriminately to their friends and family members in the name of the presidency.
“The acting president should be hailed for having the foresight to set up a committee of this nature as it will go a long way in helping us sanitize the country and bring the culprits to book.”
He stressed that “as I talk right now, they have been placed on the watch list and all borders are being monitored by our men and any attempt by anyone of them to risk traveling without approval from the acting president such a public figure will be accosted.”
Probed to comment on the most likely suspects, the source declined saying that”they know themselves and they know we know them too.”
When contacted, Head, Media and Publicity of the anti-graft body, Mr Femi Babafemi, simply said, “it is a routine that we carry out every now and then but I can assure you that there is no escape route for those that will be found wanting at the end of the verification”.
Last week, speculations had been rife as to the ministries that were flash points of corruption and embezzlement of government funds and some ministries that had thrown caution into the air colluding with contractors to defraud the Federal Government.
SOURCE: vanguardn 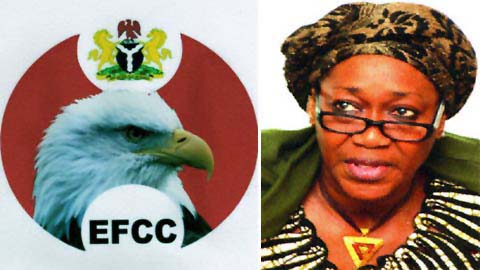