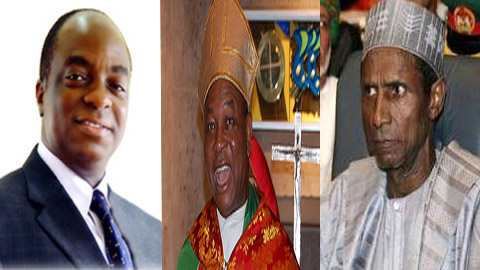 ONE week after the visit of some Muslim clerics to the ailing President Umaru Yar’Adua, Christian leaders, yesterday, visited the Aso Rock to pray with the president.

According to the report, they arrived Aso Rck at about 4.30 p.m. and as it happened during the Muslim clerics’ visit, they prayed with the President for quick recovery.

It was not immediately clear if there was any exchange of words between the visitors and the President but our source said the man was in high spirit and made efforts to thank his visitors for their continued prayers for him and the nation.

Earlier in the day there were speculations that efforts to get the General Overseer of the Redeemed Christian Church of God, Pastor Enoch Adeboye and the PFN President, Pastor Ayo Oritsejafor to be part of the visit flopped because of some logistic problems.

The development led to an alternative arrangement by the Yar’Adua group to arrange for another batch of clerics to visit Aso Rock.

When Vanguard yesterday contacted the Christian Association of Nigeria, CAN, President and Catholic Archbishop of Abuja, Most Rev. John Onaiyakan, on the reported visit to the ailing President , the clergyman said he had no comment for the press.

The president has not been seen in public since November 23 last year.

The nation was jolted last week with the reports that four Muslim clerics including the Chief Imam of Abuja, visited the President and prayed with him.

It will be recalled that three Islamic clerics led by the Chief Imam of the National Mosque in Abuja, Ustaz Musa Mohammed, visited President Umaru Yar’Adua last week and in an interview with BBC said the man could not speak coherently.

Ustaz Mohammed, however, expressed optimism that Yar’Adua may resume duties soon, as “he has improved remarkably.”

He said the Pesident sat down when they were with him and was dressed in jumper and trousers with a cap to match. Besides, the Islamic leader who said that he was on the visit together with Dr. Datti Ibrahim Ahmad, President of the Supreme Council of Sharia in Nigeria and one Sheik Musa Pantami, explained that they sought permission from the President’s family to see the ailing President and not that they were invited to see him.

He said: “We met him sitting down with his wife while his ADC stood behind him. Although we could not hear what he said, from where we sat, we could see his mouth saying Amen, together with us when we prayed for him. In fact, contrary to rumours that he was seriously ill, we saw that he had improved tremendously and we believe he would be able to resume work any moment from now.”

Another of the clerics, Dr. Ibrahim Datti Ahmad told newspapers that though Yar’Adua shook hands with them and prayed together with them, he didn’t talk to them.
Source: Vanguard Newspapers – www.vanguardngr.com