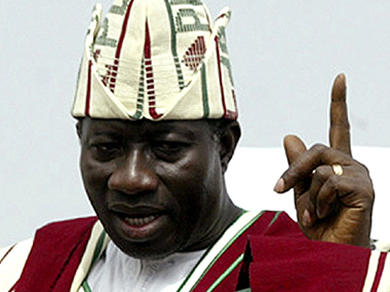 He told journalists at the National Assembly, Abuja that Jonathan could vie for the race on the platform of the Peoples Democratic Party.

Ojuogboh later issued a statement clarifying that he only said the President could contest if he so wanted.

But the terse retraction did not substantially change the interview he had earlier granted journalits.

He was, however, quick to explain that his comment was personal and not that of the President or Presidency.

Speaking to journalists earlier Ojuogboh said, “Mr. President is a PDP President, and he is a member of the PDP and Mr. President will run under the PDP. It will not be the first time issues like this will happen.

“In any case, it is our belief that Jonathan contesting, and winning the election, will be a renewal of a mandate. It will deepen the peace in the Niger Delta. It will also serve to deepen our democracy.

“If you look generally, most people across both the Southern and the Northern parts of the country have been commenting freely on the issue and the general consensus is that he should contest.”

The presidential aide defended his opinion by citing Section 14 of the 1999 Constitution, which according to him, allowed Jonathan to contest the presidential poll.

Reminded of PDP’s zoning formula, he said that it was an internal matter of the party which would be settled very soon.

According to him, “The party is an organ for the quest for power and in the organ, there are many branches and the PDP at the correct time will resolve the issue.

“Zoning or no zoning, there is no moral justification for anybody to ask Jonathan not to run. That is one thing that is paramount in the minds of every body.

“What offence has he committed that you will ask him not to run? What is the reason, because of zoning? In any case, the party will resolve that and I can assure you that it will be resolved in his interest.”

Asked if he had the mandate of the President to make the declaration, Ojuogboh, said mandate to speak for the President was not an issue.

He said, “All what I said is my personal belief as a private citizen with the right to freedom of expression. It is a general debate that is ongoing and then it is those of us who work for the President, it is our own right to join the debate and we are joining it. And then we are telling you that the President will contest.

“We want to make it very clear that if you have any reason for which the President should not contest, let us know and we can debate it. It is a debate, so it is not an issue of mandate or no mandate. It is a general debate.

“You too might have your own side of the story, you might not agree with us, and at the end of the day, it is the superior argument that will win the day.”

Ojuogboh stated that Jonathan was being asked to contest the election because he enjoyed support from all the six geo-political zones of the country.

He said,“ Jonathan winning in 2011 will change Nigeria. It will bring what we are looking for. Look at the momentum he is putting into looking for a solution to the power problem; look at how he has concentrated.

“He is ready to work. In fact, one thing I will assure you, everybody will agree very soon when you see the programme he has on the ground. When it begins to manifest, you will see that there is no reason to ask him not to contest. He is the man that will do the job we want him to do.

“The man will have to put his energy into governance. Let us give him the next for years, after all, it is a joint ticket.

“It was meant to be eight years for the two of them, and now there is no justification for you to ask him not to do the next four years. That is why for heaven’s sake, people should think correctly and in the best line.”

Ojuogboh later issued a statement in which he insisted that his comment was personal.
Source: Punch Newspapers – www.punchng.com