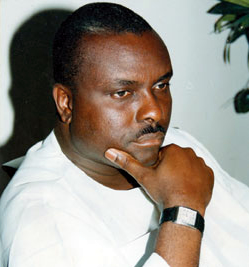 trong indications emerged on Saturday that the former Delta State governor, James Ibori, may be in fresh trouble as the Metropolitan Police in the United Kingdom have given the Economic and Financial Crimes Commission court records and documents of his alleged conviction in the UK.
It was also gathered that the Police in Dubai, United Arab Emirate have seized the former governor‘s travelling documents.

This is coming on the heels of the trip of a team of operatives from the EFCC and the MET Police to the United Arab Emirates on Friday. The EFCC team comprising lawyers, it was learnt, also went to Dubai with Ibori‘s case file and other documents to hasten the former governor‘s extradition to Britain.

Our correspondent learnt that the EFCC is planning to use Ibori‘s alleged record of conviction as one of the charges against him during his prosecution in the United Kingdom.

A security source said, ”His previous criminal conviction in the United Kingdom is definitely one of the charges against him because he lied on oath and obtained under false pretence the salary of government for eight years.

“A convict should not be a governor but he deceived the people and used his position to collect remuneration that he shouldn‘t have gotten. His travelling documents had to be seized to prevent him from sneaking out like he did in Nigeria.”

According to the source, security operatives and embassy officials are watching the ex-governor round the clock.

She said, ”We have security agents and embassy officials monitoring him. The Dubai police have assured us that he will not sneak out of their country. They assured us that they only granted him bail but he is still under ‘strict surveillance and restriction.”

Our correspondent gathered that security operatives from Nigeria, Britain and Dubai will start the extradition process on Monday.

The source said, ”The legal process of extraditing him will begin on Monday. You know that courts don‘t work on weekends. By Monday, all members of the investigating teams from Nigeria and Britain will all be in Dubai, then we will be in court to start the extradition proceedings.”

Explaining the importance of the MET Police in Dubai, the source said, “Even though we have a heap of evidence against him, there is no treaty between Nigeria and the United Arab Emirates even though the treaty is under way. We are working with the MET police because the United Kingdom and Dubai have this treaty. They are the only ones that can get him for us.”

It was also learnt that after the former governor‘s extradition, he will face charges in Britain before returning to Nigeria. She added, ”When he gets to the UK, he will face all the charges he has pending before him in their court which will not take more than one month. If he is sentenced, he will not immediately serve the sentence. Ibori will be brought back to Nigeria where he will be made to face the charges here. If he is also sentenced in Nigeria, he will serve the sentence before going back to fulfil that of Britain.”