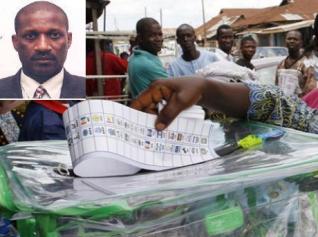 In addition, the National Council of State, NCS, a body made up of past heads of state and Chief Justice of the Federation, with all the state governors will meet Thursday to consider the nomination as required by the constitution.

Vanguard can also disclose that Bello’s nomination might have been the indirect result of consultations with a key segment of the Nigerian society: the human rights community.Enquiries by Vanguard, yesterday, revealed that Bello, who might “have been screened and passed fit to be the chairman of INEC, is very capable” of taking charge at INEC.

Contrary to speculations in the media, Vanguard can authoritatively reveal that Nigerians would be shocked at the expected announcement of Bello as the new helmsman at INEC.

Vanguard’s cue on the possible person to replace Professor Iwu was provided by President Jonathan in far away Nice, France. A source said that Mr. President had immuned himself from “the plethora of persons who had been presented as possible replacement.”

Bello, who had been at the helm of affairs at the National Human Rights Commission, NHRC, is said “to be a very energetic and zealous individual.”

Vanguard can confirm that President Jonathan had never met Bello before in his life. In fact, the delay in the announcement, apart from the needed endorsement of the NCS, was caused by Jonathan’s lack of any personal of filial relationship with the nominee. Vanguard can also confirm that Bello’s nomination was the handiwork of a bloc, the human rights community.

President Jonathan had, Sunday, in France revealed that the final screening for a new INEC Chairman was concluded Saturday night, and would be made known to Nigerians after the National Council of State, NCS, had ratified the nomination.

Jonathan also said that though he had neither seen nor met the new appointee all his life, but from the report of the screening, the new man could possess the needed energy and zeal to conduct credible elections that could stand the test of time.

President Jonathan had also made it clear that none of those being speculated by the Nigerian media came close to the identity of the man that would eventually emerge, noting that throughout his career as civil servant and politician he never met with the lucky Nigerian.

Jonathan, who arrived the Nice International Airport at 3.00 p.m. (local time) narrated how the names of possible nominees (State commissioners) proposed and submitted to him by some governors for consideration were jettisoned simply because of his desire to give the best to Nigerians.

He also noted that after the stabilization of the nation’s polity, one of his priorities was how to conduct credible elections for Nigerians, adding that he hoped to achieve this by giving it all it takes for the nation to get it right for the first time, in terms of elections where every vote counts, appeared excited at the choice he had made for Nigerians.