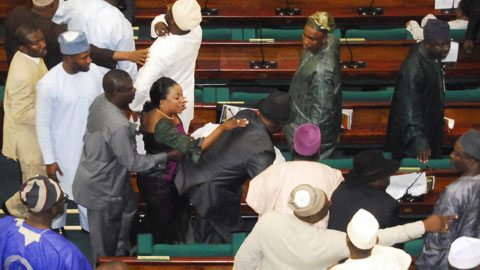 The House of Representatives session erupted into a free for all today, with at least one member injured, as 11 members of the Progressive Group, calling for the removal of the Speaker, Dimeji Bankole, were suspended till the end of the legislative session.

The 11 members are demanding for investigation into allegations of corruption against its leadership. They were suspended after a motion was moved by Chile Igbauwa (PDP, Benue) and seconded by Shehu Garba Matazu (PDP, Katsina). They are also to be investigated by Ethics and Privileges Committee and will remain suspended until the investigation is concluded. The 11 members will also not collect salaries and allowances throughout the period of suspension.

Moving the suspension motion, Mr. Igbauwa relied on Order 5 (1) Sub-rules 2 and 3 of the House Rules, Order 7 sub rules 3B, C and D, Section 60 of the 1999 Constitution and Section 24 of the Legislative Houses (Powers and Privileges) Act, while moving his motion.

The suspension was preceded by rowdiness after the insistence from the Progressive Group members that Mr. Igbauwa should not proceed with the motion. In the melee that ensued, members of the Progessive Group that included Dino Melaye, Austin Nwachukwu, Bitrus Kaze, Solomon Awhinawhi, and Doris Uboh were bundled out of the chamber by the Speaker’s loyalists, who also tore their clothes. It was not clear if three other members who were originally part of the group when it gave the seven days ultimatum to resign two weeks ago, would be suspended.

The media aide to the Speaker, Kayode Odunaro, in a statement describing the fracas, alleged that “the rowdy session was instigated by Dino Melaye and his group.” Mr. Odunaro also alleged that a member of the group, which he referred to as the ‘Dino group’, came into the chambers with tear gas that “he was using during the fracas and was beaten and stripped naked before camera for refusing to leave the chamber after suspension.”

He added that Mr. Dino’s clothes was equally torn while a supporter of the Speaker, Mr. Igwe, had his hand dislocated by a member of the group identified as Mr. Nwanchukwu, after using a tear gas canister on him. The statement also revealed that Doris Uboh, a member of the Dino group, “collapsed in the fray and was carried out, while Independence Ogunewe escaped through the back door to escape beating”, the statement read.

The House, however, resumed after order was restored to consider a bill on custom after Mr. Bankole apologised to Nigerians for the action of some of his members.
Source: Next Newspapers – www.234next.com