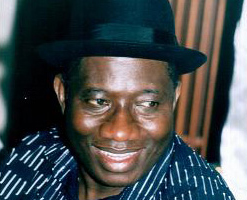 President Goodluck Jonathan has extended the new salary package to the military, para-military, police and intelligence community, who were not always covered by similar salary reviews in the past.
The extension of the jumbo increase to other public servants as opposed to the core civil servants, has shot the entire wage bill to N267. 4 billion.

President Jonathan had on May 1, 2010 promised to implement a new salary package for workers.
The new wage bill, which is said to be effective from July 1, 2010, shows an increase of N233,034,129,947 or 777 percentage increase from the present N34,388,156,375, which the Federal Government spends on core civil servants annually.
The wage bill is contained in a letter sent to the Minister of Finance Olusegun Aganga and Head of Service Steve Oronsaye by President Jonathan.

The letter was signed by the Senior Special Assistant to the President (Administration), Mr. Matt Aikhionbare.
The letter reads, “I am directed to forward Reference A to you and to convey to you Mr. President’s approval of paragraph 8 on page 3.”
Also, attached to the letter was a letter from Oronsaye to the President, which gave the details of the salaries increase for federal workers.

The letter reads: “Your Excellency may please wish to be informed that the compilation of the increase for the core civil service is an increase in wage bill of N34,388,156,375 per annum.
“However, because of the unrest the increase for the core civil service will likely generate among parastatals, the para-military, the police, the Armed Forces, the intelligence community and research institutes, it was recommended that a holistic approach be adopted.

“The cost implication of the holistic approach is a total wage increase of Two Hundred and Sixty-Seven Billion, Four Hundred and Twenty-Two Naira (N267, 422, 286, 322) per annum.”
A memorandum containing the proposed agreement reached between the Federal Government Team and the Joint National Public Service Negotiating Council-Trade Union Side was also attached.

The letter continues, “Your Excellency is invited to please note:
(i) That the salary negotiation committee has completed its assignment;
(ii) That increase of 53.37 % was agreed for Salary Grade Level 01-16 and for Directors at least 1/3 of the Salary of a Permanent Secretary;
(iii) That for peace to reign, increase of the same percentage for parastatals, para-military, the Armed Force, the intelligence community and the research institutes is recommended.
(iv) That additional Two Hundred and Sixty-Seven Billion, Four Hundred and Twenty-Two Million and Eighty-Six Thousand Naira (N267,422,286,322) is required to service the increase per annum;
(v) That 50 per cent of the figure in paragraph 1v above will be captured in the 2010 Supplementary Budget;
(vi) That the Budget Office is in agreement with the cost implication of the increase.
He consequently asked and got the President’s approval for salary increase of 58.37 per cent for workers at Grade levels 01-16.
The President has also directed that salaries of directors in federal ministries and agencies be increased by at least 1/3 of the salary of a permanent secretary.

The Armed Forces, police, paramilitary, intelligence community (State Security Services, Nigerian Intelligence Agency among others), parastatals as well as research institutes will also enjoy the same salary increase.
President Jonathan approved the new salary structure wherein the new minimum wage, that is the salary of the least paid worker, is put around N17, 000.
The President has also proposed a supplementary appropriation to take care of the wage increase among other things. The bill is receiving the attention of the National Assembly.

Defending the wage increase, the President had said in his postings at the weekend on Facebook that the high cost of goods and services was the reason his administration decided to pay living wages to workers in the public service.
He had said: “Having taken time to inform myself of the prices of the most basic goods and services. I personally can imagine the strain many Nigerians go through in order to make ends meet.

“As such, I’m glad to report that progress has been made in terms of paying living wages to workers under the control of the Federal Government. This will not remedy the situation but it will grant some relief while we also apply the resources at our disposal to improving other sectors that will have a positive impact on our general standard of life.”
Meanwhile, Oronsanye has confirmed that the Presidency has approved wage increase for ministries, departments and agencies, which were not considered for salary review in the past.

Speaking with newsmen at the opening ceremony of the Procurement Skill Training for Federal Ministries, Departments and Agencies in Abuja, Oronsanye, however, said the payment of the new wage would commence after proposals currently before the National Assembly have been passed.
Also, the head of service cautioned the federal workers who see training programmes as opportunity for welfare packages that “it is no longer business as usual” as they will now be assessed at the end of every course conducted by the office to know if they have added value to themselves.”

He said: “And if you do not scale through that test you don’t go for any promotion exams… academic qualification is not the issue, it is competence, we do know that there are people who have certain qualifications but they cannot express themselves; academic qualification only brings you to be considered but it is what you are able to offer when you are tested that is important,” he said.
According to him, only 180 out of 1,500 civil servants who applied and participated in the previous training exercise actually passed the assessment given at the end of the course.

“That is the reason why I stressed that it is no longer welfare…before now, people go to training because of the allowances they’ll get, they just show up but when you now introduce the competency test at the end of the training exercise, you find that people now take it seriously.
“I can just tell you only recently the office of head of service reintroduced the mandatory training but what was new was that at the end of the training, people were tested…what we found out is that those who took the very first set of training didn’t do well at the end but those coming after, the pass rate was very high and because they now know that they’ll be tested from day one, they’ll take it seriously. I believe that the pass rate this time will be better than the first one.

“The beauty of all of it is that at the end of the training programme, you’ll then be assessed. This tells you that it is no longer business as usual, we should not just take training as a welfare package…by the time you come in for training, you should from the very beginning know that it is a very serious business because you’ll be tested at the end when you finish,” he said.
Director-General, Bureau of Public Procurement (BPP) Emeka Eze explained that the idea of the workshop was to ensure that public servants are brought to a level where they could help government to achieve value for money in public expenditure.

“The idea of public procurement is to make sure that value for money as a policy of public expenditure is achieved. My expectation is that at the end of this workshop, participants would have been in a position to quickly at the close of the eyes know the ABC of public procurement so that if any political office holder comes or permanent secretary, they would be able to advise them
that this is what the rule says about how things are going to be done… rules for the sake of ensuring transparency and efficiency and providing level playing ground to all Nigerians that there is something happening in our ministry,”
The training programme is organised for officers in MDAs who want to covert to the new procurement cadre that has been created by the federal government.