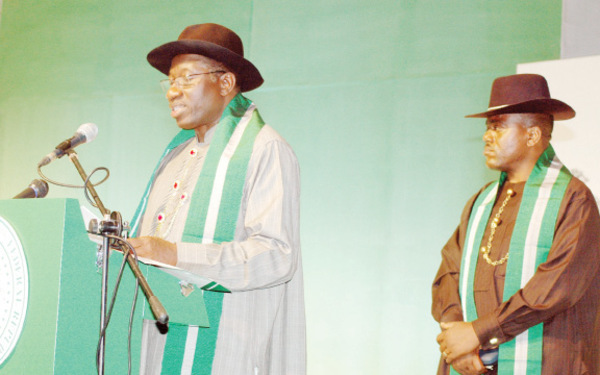 Senators yesterday lambasted the presidency’s plan to spend about ₦10 billion on the celebration of Nigeria’s 50th anniversary as an unnecessary extravagance.

The lawmakers who were debating the supplementary budget bill submitted by President Goodluck Jonathan, which included the sum of ₦10 billion for the celebration, described the plan as bogus and out of place. “This is just appropriating money for some people to siphon,” Andrew Babalola (PDP Oyo State) said. “It should be removed completely and budgeted for employment generation”.

Mr Babalola added that it was misplaced priority for the nation to spend that much on celebrations when most able-bodied Nigerians are without jobs.

His argument was taken up by other senators who said there was nothing to celebrate.

Osita Izunaso (PDP Imo State) said that since Nigeria gained independence, the country has not achieved any meaningful progress that will justify such ostentatious celebrations.

“What are we celebrating?” Mr Izunaso said. “Nigeria at 50, to me, have not achieved anything worthy of celebration.” Arguing in the same line, Joseph Akaagerger (PDP Benue state) said: “I do not think there is something to celebrate after 50 years, I support the bill (supplementary budget) but nothing should be reserved for the celebration.” Others argued that even though the nation hitting the golden age in unity calls for celebration, the celebration is not worth the N10 billion proposed for it.

“My idea is that the money voted for the Nigeria at 50 celebrations should be slashed to the barest minimum and we think of appropriating it for job creation and reduction in unemployment,” Dahiru Kuta said.

Since the presidency made the decision to spend N10 billion on the celebration of the nation’s 5oth independence anniversary, it has come under heavy criticism from the general public, setting up a cue for the senators.

The supplementary budget, which is worth ₦639 billion, however passed through for second reading despite the oppositions to some of its contents.

Teslim Folarin, the senate leader who led debate on the bill, said the additions being sought after by the president will also be applied to settle the negotiated civil service wage increase and the Power Holding Company of Nigeria (PHCN) arreas of monetisation.

“This bill becomes necessary due to the desire of the federal government to provide funds to accommodate certain critical items such as statutory transfers, debt servicing, the service-wide vote and other critical expenditure heads that were either inadvertently omitted or under-provisioned for in the 2010 appropriation act,” the senate leader said.

The senate also passed the request of the president to slash the 2010 budget by 40 per cent for second reading.
Source: Next Newspaper – www.234next.com