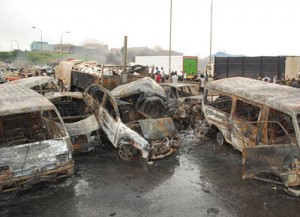 A MAN, his wife, his three children and his mother were said to be among scores of lives that perished, weekend, in a multiple auto crash that occurred along Lagos-Ibadan Express road.

A pregnant woman and her two children were also among those burnt beyond recognition in the accident even as unconfirmed report put the death toll at 72.

The man, identified as Mr. Adegboyega, reportedly left his Ikeja abode, Sunday morning, in the company of his wife, three children and his mother. They were reportedly heading for Ibadan in their private car when the unexpected occurred midway.

An eye witness who gave his name as Mohammed, said about 72 charred remains were counted. Mohammed who resides in an uncompleted building around the area, added that most of the victims were chocked to death by smoke.

Vanguard’s investigation revealed that most of the accident victims who were rushed to the Lagos State University Teaching Hospital, were turned back because of lack of presence of the doctors, who were on strike.

Another eye witnesses who gave his name as Mr. Adamson Chimemela, told Vanguard at the scene: “I rushed five of the survivors in my car to LUTH where I was told doctors were on strike and as such nothing could be done as regarding their being treated. Some of them were partially burnt while others were too weak to even speak.

“They were administered first aid by some officials of the Lagos State Ambulance Services who were stationed inside LUTH premises. I did not know what happened thereafter because I left them in the officials care.”

Similar fate reportedly befell others who were rushed to other government hospital.
Vanguard also gathered that those who sustained minor injuries were treated by LASAMBUS officials at Ojota and thereafter discharged.

When Vanguard visited some motor parks around Ojota to ascertain whether any of their members was involved, they all claimed none of their drivers was involved in the ghastly auto crash.

Family members who were yet to hear from their loved ones who travelled Sunday, were sighted at the scene of the incident. Three of them gave the names of their missing relatives as Ganiu Omolaja, Gbemisola Ayeni and Adebisi Onaikan. Two of them as gathered, were students of the Ogun State University.

Charred remains of the victims were deposited at the Ikeja General Hospital and Gbagada hospital mortuaries, while the damaged vehicles were removed to the Oregun dump site.

Meanwhile, normal activities have resumed at the scene of the accident as families and relations besieged the premises of the Lagos State University Teaching Hospital, LASUTH, in search of their missing family members.

Policemen and volunteer individuals were seen removing charred vehicles from the debris to give way to free traffic that was yet to reduce at press time while the Lagos State Traffic Management Authority, LASTMA, towing van was stationed to equally render services.

A Police officer said the security officers worked all through the night to ensure that the charred bodies and vehicles were cleared from the road, noting: “The situation was really terrible, it took the joint effort of the police, LASTMA, road safety and the fire service to get the road back to shape again. As you can see the traffic is now moving unlike yesterday when this road was impassable.”

He said that the team worked all through the night, adding that they would not relax until the situation was brought under control.

A commercial motor cycle operator, Mr. Daniel Dubor, commended the officials for their effort in restoring normalcy back to the area, noting: “What happened here yesterday was terrible. I counted up to three buses fully loaded that was burnt with the passengers inside. Besides the incidents led to a crazy traffic jam that lasted for several hours.

“As you can see, all the burnt vehicles that littered the road yesterday have been removed except that trailer they are off loading the sugar from.” He said that the trailer in question was suspected to have caused the accident.

At the Lagos State Accident Emergency Centre where some of the injured victims were rushed to, the Chief Matron, Mrs. Olayinka Aderibigbe, told Vanguard that the victims were treated and discharged immediately.

She said that three of the victims already discharged were treated of burns, bruises as well as fracture, adding that other critical conditions were referred LASUTH, Ikeja.

At LASUTH, the management told Vanguard that neither the dead nor any of the one injured were accepted at the hospital due to the ongoing strike embarked upon by the medical personnel.

One of the survivors of the accident, Mr. Isaac Ejiwere, said there was a team of policemen that mounted road block at the point of the accident. He argued that had it been the policemen carried out their illegal activities with sense, such magnitude of accident will not have occurred.

Ejiwere said: “We were waiting to pass-by the road block when I suddenly heard bashing of cars from behind. When I got out from the bus that I was travelling in to observe what was happening, suddenly I saw a trailer engulfed in fire. Some of us managed to escape from the inferno.”

Dotun Ajala, another passenger who escaped death by whiskers said he would have been burnt to death if not for God.

He said the vehicle in which he was travelling was burning after the whole area had been enveloped by smoke, adding: “I cannot say this is how I managed to escape but I believe it was the will of God that I will be alive today.

What baffles me most is the fact that the policeman that mounted the road block ahead of us disappeared immediately after the accident had taken place.”

Mrs. Abidemi Ashafa told Vanguard that his eldest son, Tajudeen Ashafa, was on his way back from Lagos Island to Isheri town nearby the scene of the accident when a petroleum carrying trailer ran into a queue of vehicles before the road block mounted on the highway by a group of policemen.

She put the blame on the policeman asking, “When would the police stop killing Nigerians indirectly because of peanuts?”

Ashafa wants the Inspector General of Police, Ogbonnaya Onovo to institute a thorough investigation into who gave the order to the policemen that mounted road block on the Lagos-Ibadan expressway at about 10.30am last Sunday, stressing: “Nigeria Police cannot continue to fold its arms when innocent lives are being sent to early grave because of few greedy policemen.”