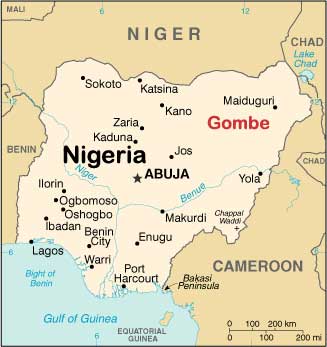 CHOLERA death toll in Nigeria has climbed to 352, according to an update from the Federal Ministry of Health.

According to him, most of the outbreaks occurred in the North-West and North-East zones but epidemiological evidence indicated that the entire country was at risk.

“The disease is endemic in most parts of Nigeria but often occurs in epidemic proportion at the onset of the dry season.

“This is because people scramble for drinking water from doubtful sources and during rainy season when contaminants are washed into surface and underground water sources,’’ Anibueze said.

He said that the outbreaks in most states, particularly in the north eastern part, were as a result of heavy rains in most parts of the country.

He said that a survey by the ministry revealed that less than 40 per cent of the entire population in the affected states had access to toilet facilities of any description.

“Another major factor responsible for the epidemic is the fact that 66 per cent of the rural dwellers lack access to safe drinking water, while the wells from where drinking water is drawn are without cover, hence open to contamination,’’ he stated.

The director also confirmed that 83 deaths and 5,073 cases of measles had been reported this year in 11 states.

Health Minister, Professor Onyebuchi Chukwu, had earlier confirmed that 231 persons had died of the disease with 4,600 others receiving treated at various health institutions.

Experts say the disease causes serious diarrhoea and vomiting that lead to dehydration within a short period of incubation.

Also, on Wednesday, the Kaduna State government said that no fewer than 60 people had been treated of a disease suspected to be gastroenteritis, while four deaths had been recorded.

Mrs Charity Shekari, the state Commissioner for Health, made this known to the News Agency of Nigeria (NAN) in Kaduna shortly after an assessment tour of some affected areas.

Shekari said: “Fifty victims were treated and discharged at Birnin Gwari with eight hospitalised and another two victims receiving treatment at Giwa.”

She attributed the death in Birnin Gwari LGA to late reporting of the disease.

According to her, the victims suffered severe vomiting and diarrhoea.

The commissioner said health workers and drugs had been dispatched to the affected areas to contain the situation.

Shekari also stated that technical teams, comprising staff members of the ministry, local government health personnel, UNICEF, WHO and community leaders had been put on the alert to monitor and report suspected cases.

She advised residents to keep their surroundings clean and avoid drinking dirty water.

In another development, no fewer than 42 people, including children, died on Wednesday after taking contaminated water drawn from wells and ponds in 10 council areas of Yobe State, with 484 other people infected with gastroenteritis.

Confirming the outbreak of the water-borne disease at the National Immunisation Programme (NIP) office in Damaturu, the state coordinator of the World Health Organisation (WHO), Dr Adamu Isa, disclosed that the disease, which was first recorded on July 27, at Mutai, in Gujba Council area, had not been confirmed even though there were physical symptoms of cholera.

He said the present outbreak of the water-borne disease was known to be gastroenteritis, stating that the disease had the symptoms of frequent stooling and vomiting.

Dr Isa, however, noted that the situation was worsened by lack of public health laboratory (PHL) in the entire North-East zone for gram staining and to carry out culture and sensitivity to ascertain whether or not it was gastroenteritis or cholera.

He disclosed that the test on the first sample failed at the University of Maiduguri Teaching Hospital (UMTH), while seven other samples of patients were rejected, because the equipment at UMTH was not accredited to carry out such tests for cholera.

He said that each of the 36 states in the country required PHL facilities so that they could quickly intervene appropriately to prevent further spread of cholera and water and air-borne diseases in the country.

Dr Isa noted that “it is difficult to isolate any bacterium ideally after two hours drive for test and a special transport medium containing certain chemicals is needed to keep bacteria intact for four to six hours to enable isolation for test.”

On the affected council areas and measures taken to prevent further spread, the press secretary to the deputy governor, Mallam Musa Alaraba, disclosed that the Commissioner for Health, who is also the deputy governor, had directed the deployment of over 100 health workers with intravenous drugs, antibiotics and water treatment chemicals worth N2 million to the cholera treatment camps in Damaturu and nine other centres.

Alaraba said the drugs were to aid the victims to replenish lost fluids, while they would also receive other antibiotics, as the state government continued to explore other intervention measures to save the lives of the people.

On the breakdown of deaths and the affected council areas, he said out of the 484 cases of gastroenteritis, Potiskum had the highest cases of 102 with five deaths, while Gulani and Damaturu had 70 and 67 cases with eight and five deaths respectively.

Other council areas affected by the outbreak include Gujba, 53 with 10 deaths; Fika, 48 with six deaths; Nguru, 38 with three deaths; Jakusko, nine with no loss of life; Fune , 46, with three deaths; Nangere, two with one death and Karasuwa, eight with a record of death of one person.

He said out of the 484 cases, 48 people were still hospitalised at the treatment camps, while other patients had been discharged on Tuesday.

In Katsina State, seven people have been reportedly dead of cholera in Kurfi Local Government Area of the state, barely a week after the outbeak of the disease.

Investigations carried out by the Nigerian Tribune also revealed that nine cases of measles had been reported at Babban Gida village in Rawayau area in the same local government area.

Speaking with newsmen, the health supervisory councillor of the council, Alhaji Sule Amadu Birchi, said already, the council had provided drugs and deployed casual health workers to control the diease in the area.

He, therefore, called on people in the area to ensure proper ventilation and avoid congestion in rooms while sleeping.

In a related development, the Joint Health Workers Union in Katsina State has called off its strike, to address the outbreak of cholera in the state.

Addressing newsmen in Katsina, the chairman, Joint Health Workers Union, Aminu Usman, said thought the state government was yet to meet their demand, the union decided to call off the strike as a result of the cholera outbreak.

He urged all health workers in the state to resume work, as the union would continue with its negotiations until their demands were met.
Source: Nigerian Tribune – www.tribune.com.ng