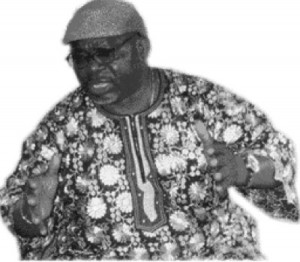 Gunmen unknowingly took on a retired Brigadier General in Abia State on Monday and turned out the worse for it; unable to kidnap him, and with one of them killed.
Joseph Okoloagu, former Nigerian military attaché to Pakistan, shot dead a member of the gang which attempted to abduct him in Aba.
He was travelling to Port Harcourt in his 604 Peugoet car when the kidnappers intercepted the vehicle in the Alaoji-Ugwunagbo axis of the Aba-Port Harcourt Expressway.
Okoloagu, now a member of the Action Congress (AC), was in the company of his private driver and a security detail when the heavily armed men suddenly surfaced from the bush and opened fire on the car, forcing it to a halt.
Policemen at a check point about 100 metres away dived into the bush on hearing the sound of gunshots, leaving Okoloagu and the other two persons in his car at the mercy of the kidnappers.
The gunmen surrounded the car, and one grabbed the wounded Okoloagu from the back seat.
Okoloagu, however, pulled out his revolver and fired at the man, who screamed in pain and slumped.
Other kidnappers retreated and took cover in the bush from where they exchanged fire with the professionally trained marksman, who refused to give up.
The gunfire attracted an Army patrol team, and the kidnappers fled on sighting the soldiers.
Okoloagu and the two other occupants of his car, who also received bullet injuries, were taken to Riverine Hospital, Umungasi, Aba, where they are receiving medical attention under heavy security provided by soldiers from Port Harcourt.
He narrated from his hospital bed: “Yes, kidnappers attacked us in Aba on my way to Port Harcourt yesterday (Monday) afternoon. They shot me on the chest, shot my security detail on the hand, and shot my driver in the head.
“I was able to kill one of the kidnappers who came to take me with my revolver before I made my escape.
“My driver is still in coma but we are praying that the bullet did not touch his brain. I am only alive today because I have my own gun. What of the people who don’t have guns?
“I think everybody in the country should have his own gun since the government can no longer protect us. There is no government in Abia State.”
Okoloagu’s driver later died in the hospital.
Police Public Relations Officer (PPRO), Ali Okechukwu, said he was yet to be briefed on the incident at press time, even though Okoloagu confirmed that he had spoken with the Police Area Commander on the incident.
Also on Tuesday, gunmen attacked the residence of President Goodluck Jonathan’s associate and confidant, Amalayan Turner, in Opume, Bayelsa State.
They took away AK 47 rifles from the policeman on guard duty at the home.
No casualty was recorded during the incident.
Turner, a retired Permanent Secretary in the state now Federal Inland Waterways Chairman, was not at home when the hoodlums visited.
Gunmen have in the past one week invaded the country homes of five political office holders in the state, including that of Governor Timipre Sylva in Okpoama.
Five stormed the palatial home of Turner in two cars at 2.30 a.m. when the community was deep in sleep.
To get into the premises, they scaled the fence of an adjacent building belonging to the Community Comprehensive School.
Turner’s Chief Security Officer (CSO), Benjamin Einighe, said they were shocked to see the gunmen, who tied the two policemen on duty and collected their rifles and canister of tear gas.
The gunmen asked of the whereabouts of Turner and where he kept his money.
“When we told them that (Turner) was in Abuja and that there is no money in the building, they proceeded to search the whole building and left with some things we didn’t know,” Einighe added.
Turner confirmed to Daily Independent that he was in Abuja at the time of the incident and has handed over everything to God and informed the Commissioner of Police, Onuoha Udeka.
Police Public Relations Officer, Eguavoen Omokpai, said the command is aware of the attack.
Bayelsa acting AC Chairman, Miriki Ebikibina, expressed sadness over the series of armed attacks in the state despite the presence of the Joint Military Task Force (JTF), State Security Service (SSS), and policemen.
Ebikibina urged Jonathan to declare a state of emergency in Bayelsa to stop the orgy of violence, which has recently led to the death of about 10 persons.