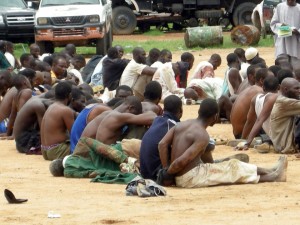 Our correspondent reports that the police station was totally destroyed while three police officers were injured.

According to some sources at the Maiduguri Prisons, there was also a foiled attack on the prison.

The police station as well as the prison was destroyed by the sect during last year’s crisis in the state.

Assistant Inspector-General of Police (Zone 12), AIG Mohammed Hadi Zarewa, has meanwhile, relocated to Maiduguri. The police are yet to comment on the matter, though the Police Public Relations Officer, ASP Mai Mamman said the AIG would brief the press.

Our correspondents, who visited the Gamboru police station yesterday, learnt that the attackers stormed the station in the night, shooting sporadically. He also observed bullet holes on the station’s gate.

Daily Trust also gathered that some religious leaders have gone into hiding, following the killing of Sheikh Bashir Mustapha.

Meanwhile, the police have intensified search within Maiduguri and its environs.
Source: Dailytrust – www.dailytrust.com