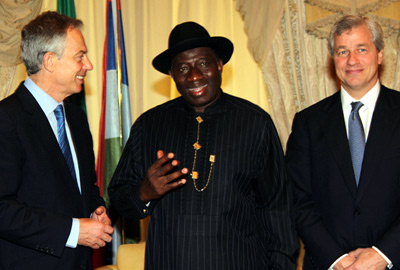 Former British Prime Minister, Mr Tony Blair, Wednesday, declared that world leaders and the international community were fully behind the re-emergence of President Goodluck Jonathan as Nigeria’s next President come 2011.
Speaking during an audience with President Jonathan, the visiting Tony Blair and the Chief Executive Officer of JP Morgan Bank of the United States (US), Mr Jamie Dimon, disclosed that it was the confidence of the international community on the ability of the Jonathan-led government that the famous JP Morgan Bank had decided to do business in the country.
According to Blair, there was a huge amount of goodwill in the international community towards supporting his President Jonathan’s efforts to achieve rapid socio-economic development in Nigeria.
He noted that the decision by JP Morgan, one of the world’s largest banks, to upgrade its representative office in Nigeria to a full-scale branch was a vote of confidence in Nigeria and the Jonathan administration.
2011: Everyone expressing great deal of interest
Blair in a chat with newsmen at the end of the visit, said everyone, including the international community, was expressing great deal of interest, great deal of excitement for the elections and everyone is anxious for the elections to be conducted in the best possible way expects.
“I think all the preparations are there and there is a lot of expectations and home around Nigeria which is a great thing. Back in the West, things are pretty difficult politically, difficult economically.
There is a hugely enhanced interest in Africa and in Nigeria, so everyone is kind of working and rating. There is a lot of hope and excitement,” he said.
Nigeria to generate 20,000MW of electricity
Jonathan, in his respond, said Nigeria should be generating 20,000 mega watts of electricity by 2014, enough for use in homes, offices and commercial enterprises.
He projected that by April next year if the administration’s plans for the sector are fully implemented, Nigeria would begin to witness power stability.
To achieve this feat, the president said the Federal Government was tackling challenges in the area of power transmission, stressing that government intended to move as quickly as possible on the construction of a new National Power Transmission Super-Grid to replace the existing grid which can no longer meet the nation’s power transmission needs.
He told the visitors that Nigeria would welcome support from international finance organisations and global banks such as JP Morgan through long-term financing for the super-grid project which is critical to assuring the sustainability of stable power supply in the country.
Jonathan stressed his administration’s efforts to boosting agricultural production in the country through large scale commercial farming as well as measures being taken to sustain peace in the Niger Delta.
Russian on bilateral agreement
Meanwhile, also yesterday, Foreign Minister of the Russian Federation, Mr Sergey Lavrov, came calling on President Jonathan to follow up on the implementation of bilateral agreements signed during President Dmitry Medvedev’s official visit to Nigeria last year.
Jonathan assured the foreign minister of his administration’s willingness to facilitate the implementation of the agreements and the expansion of areas of economic cooperation between Nigeria and the Russian Federation.
Lavrov told the President that Russia was very keen on “enriching” its relations with Nigeria through large scale economic projects.
Source: Vanguard Newspaper -www.vanguardngr.com