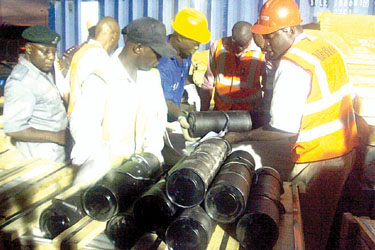 The first direct sign of the brewing diplomatic row between Nigeria and Iran occured on Monday as the Nigerian Football Federation postponed its friendly football match against Iran.

Although the NFF Acting Secretary -General, Mr. Musa Amadu, told the Associated Press that the “non-availability of our key players,” was responsible for the development, a source in the NFF Glass House headquarters told THE PUNCH that it had “to do with the seized arms and ammunition at the Apapa port in Lagos.”

“We cannot go ahead with the match in view of the misunderstanding between our country and Iran over the weapons that were seized by intelligence agencies in Lagos port. We have to show understanding by postponing the match,” the source added.

They, however, did not say when the match would now be played. When pressed further on why the federation took the decision, the NFF chief replied, “You are free to speculate.”

The postponement of the match comes days after Nigeria said it would take action against Iran if its investigation showed it violated international law.

The arms and ammunition concealed in 13 containers were shipped from Iran to Nigeria. Two Iranians believed to be the importers are reported to be hiding in the Iranian Embassy in Abuja.

Reuters quoted diplomatic and security sources on Monday as saying that the suspects were senior members of Iran’s elite Revolutionary Guards.

Mottaki, at a press conference in Tehran, said a new envoy whose name he did not give, had been posted to Nigeria.

He also did not state the reason for Abdullah’s recall but said that the ‘misunderstandings’ between Iran and Nigeria had been solved.

“I think the misunderstandings have been settled in this field,” Mottaki said, adding that they were created by ‘enemies’ to damage Iran-Nigeria ties.

In late October, Abdullahi had said there was no clear evidence linking Iran to the weapons shipment.

The Iranian news agency, IRNA, also quoted the minister as saying on Monday that the two Iranians implicated in the importation of the arms and ammunition had given necessary information to Nigerian investigators.

Mottaki said, “The Iranian national working for the private company involved in the issue has provided Nigerian officials with necessary explanations and I believe the existing misunderstandings about the issue were now removed.”

The minister also explained that his trip to Nigeria on Friday was ‘a short working visit’ made in line with his four-nation tour of West Africa.

He also confirmed that he discussed the issue of the seized weapons with his Nigerian counterpart, Mr. Odein Ajumogobia (SAN), whom he said would soon visit Tehran.

The minister, however, insisted the consignment was actually bound for an unnamed West African country.

“The seized cargo belonged to a private company and it was for sale legitimately to a West African country,” he added , without naming the country.

Although there had been reports that the weapons were heading to The Gambia, the State Security Service claimed that they were ordered by some politicians to destabilise Nigeria if they failed in the 2011 general elections.

When contacted on Mottaki’s claim that the misunderstanding between the two countries had been resolved, the spokesman of the Nigerian Ministry of Foreign Affairs, Mr. Ozo Nwobu, said investigations into the matter had not been concluded.

He said, “To the best of my knowledge, there is nothing different from what our minister ( Mr. Odein Ajumogobia ) said at the weekend. The matter is still being investigated.

“If at the end of our investigations we find that international law has been breached by any foreign country, Nigeria will take appropriate steps.”

A United States-based Nigerian news agency, Empowered Newswire, reported on Monday that the Security Council had set up an eight-member expert committee to find out if Iran had breached its resolution on the sale of arms.

The committee headed by Ms. Salomé Zourabichvili of France has a Nigerian, Maj.-Gen. Ishola Williams, as a member.

Empowered Newswire said although the panel would examine all the issues on the arms embargo on Iran, the shipment to Nigeria might have compelled its establishment.

The agency added that the US had also indicated interest in assisting Nigeria to investigate the matter.

“If these reports are true, these are potential violations of Security Council resolutions; we will obviously encourage and assist Nigeria in any way that we can with its investigation,” the State Department spokesman, P.J. Crowley. said.

Ajumogobia had said on Friday that he would report Iran to the Security Council if it found any evidence that the shipment broke UN sanctions imposed over its refusal to halt sensitive nuclear activities.

He is expected to address the Security Council on Tuesday (today) on Sudan and might also be meeting with other diplomats on the Iranian shipment issue.
Source: Punch News – punchontheweb.com