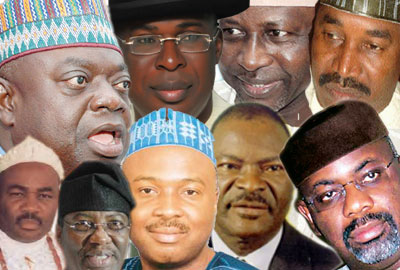 THE battle for the Peoples Democratic Party, PDP, presidential ticket took a near definitive turn, yesterday, after 21 Governors belonging to the party signed a declaration of support for President Goodluck Jonathan’s 2011 presidential bid.
The governors, however, couched their endorsement on the President running for a single term of four years.
Jonathan’s rival for the PDP ticket and erstwhile Vice_President Atiku Abubakar, immediately dismissed the endorsement saying it would be of no relevance so long as the democratic choice of delegates to the presidential primaries was not encumbered.
The stage for the governors’ endorsement was set after a series of marathon meetings at both the Presidential Villa and the national secretariat of the party.
The endorsement which came on the heels of the face-off between the Governors on one side, members of the National Assembly and the President on the other, caught many by surprise at the end of the PDP’s 55th National Executive Committee, NEC, meeting of the party.
Governor Ibrahim Shema of Katsina State who read out the endorsement, said the NEC meeting also adopted recommendations of the National Working Committee’s, NWC, proposals on dates and guidelines for the party’s primaries for elective offices.
Before the endorsement, the Governors led by Governor Bukola Saraki had met in the Presidential Villa from about 4.30 p.m. till about 7.00 p.m. before they reached an agreement which it is believed also paved way for first term PDP Governors to easily get the PDP gubernatorial ticket in their States.
The news of the agreement brought some measured relief to presidential aides who easily heaved sighs of relief at the end of the meeting.
Following the agreement which was conveyed to the President, the Governors proceeded from the Presidential Villa to the national secretariat of the PDP where their resolution was announced by Governor Shema.
Govs that endorsed Jonathan
Governors of the following States endorsed the resolution:
*Benue,
*Niger,
*Katsina,
*Akwa Ibom,
*Cross River,
*Gombe,
*Rivers,
*Adamawa,
*Bayelsa,
*Plateau,
*Nasarawa,
*Kaduna,
*Kebbi,
*Bauchi,
*Kogi,
*Delta, and
*Zamfara.
The Deputy Governors of Taraba,
*Ogun,
*Imo and
*Oyo endorsed on behalf of their Governors.
The governors’ resolution
THE resolution read thus: “At the emergency meeting of PDP Governors held Thursday, December 15, 2010 and having deliberated extensively on democratic practices the world over, observed as follows
*democratic systems the world over recognize the principle of incumbency and continuity
*entrenched democratic culture persistent in presidential systems and our constitution entitles our President to run for a second term, which the PDP Governors support
*the Governors also recognise the Yar‘Adua Jonathan ticket and, therefore, hereby support and endorse President Goodluck Ebele Jonathan to contest the 2011 election as the PDP presidential candidate for a period of four years only.
Atiku team dismisses endorsement
THE Atiku Abubakar Campaign Organisation, immediately dismissed the endorsement as irrelevant saying the Governors could only mobilize their own votes for Jonathan.
Atiku’s reaction stated: “The so_called Governors’ endorsement is of no significance so long as they do not take away the right of delegates to vote. We are in a democracy. Governors have a right to make a democratic choice and so do the delegates. Let there be no intimidation of delegates.”
The party also adopted guidelines and dates for the primaries into elective positions. The primaries are to commence on Tuesday, December 28.