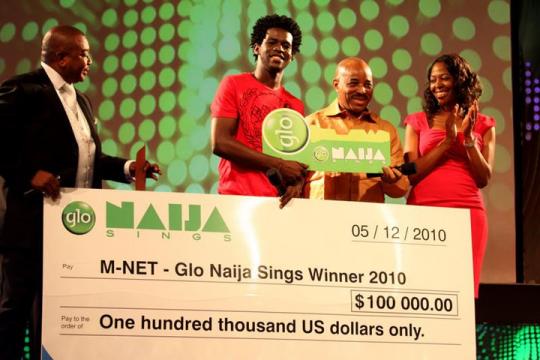 After 8 weeks of stiff competition amongst 10 contestants, Casey has been announced the winner of the second season of Glo Naija Sings.

On Friday, December 3, 2010 Casey was announced the winner of the Glo Naija Sings at the grand finale at the MNET Studios in Lagos; beating the other two finalists Rasine and Da brodas to the $100,000 (N15m) grand prize and a Toyota Rav 4.

Overwhelmed by excitement and disbelief, Casey fell flat to the ground as host Olisa Odibua pronounced him the winner while the disappointed Rasine and Da Brodas chickened out of the stage for the latest champion.

‘For me that I got to this top 3, I had won in many stages prior to this time; I had competed against myself; I got out of my comfort zone by performing songs by Fela with my R ‘n’B style; I had to conquer that phobia. Right now the competition is not over; I’m entering the industry so I’ve got more competition again. Everyone is expecting a successful musical career from me, something new; no one is expecting crap and that’s the task I have to live up to because I’m not going to make music for myself’, the diploma holder tells NET.

Casey whose new feat has just conferred on him an automatic Globacom ambassadorial position, has already outlined plans on where to channel the whooping sum his vocal dexterity and fortune have brought his way.

‘I intend to invest with the money and get back to school and take care of my family. I want to learn something in a music school. I just don’t want to win this money and disappear into thin air. I want to do something big in music that’s why I have a competition, challenge and serious work to do. I have to step up, from my packaging to the kind of music people want’, he added.

The resident judge Tosin Martins led all the contestants including the evicted ones on stage in an opening performance that left the studio audience screaming and applauding at intervals.

While anticipations were high as to who will be crowned the winner, Psquare was brought on stage to cool the tension which was visibly uncontrollable – Casey teaming up with Bez to perform Zuchidaya, Rasine teaming up with Tiwa Savage to perform Kele Kele Love while Da brodas’ collaboration with Wizkid for Holla at your boy soon made many forget that two of the contestants would be shown the way out for an eventual winner.

However, Telecommunication giant Globacom has promised that all other evicted contestants will be taken on tour through different cities across the country and will be duly compensated.

‘We’ll ensure we support all other contestants and will be hosting them on our several tour across the country including the Rock and Roll Glo Show’, Globacom Executive Director(HR), Mr. Adewale Sangowawa assured.
By Dimeji Ogedengbe