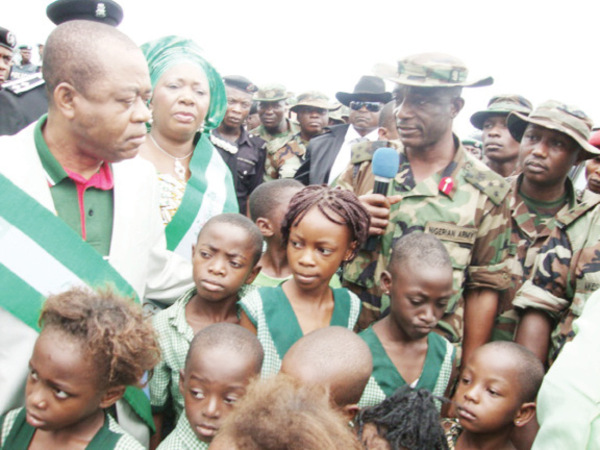 The suspected leader of kidnap gangs in Abia State, Obioma Nwankwo, popularly known as Osisikankwu, was yesterday killed by the military task force deployed to the state by the federal government. The news of his killing led to wild jubilation among residents of Aba and Umuahia. His death marked another success in the efforts of the military task force to rid the state of gangs that have made life difficult for the people of the state and almost destroyed social and economic activities in the area. Deputy army public relations officer and spokesperson of the task force, Sagir Musa, confirmed the death of Mr. Nwankwo yesterday. He said the alleged kidnapper was shot dead at Obokwe market, in Ukwa West Local Government Council, by a joint police and military patrol team.

Mr. Musa said that the military had laid an ambush for the kidnapper for some days after they learnt of his presence in the bush near the market. The kidnapper’s killing brought to an end a myth surrounding him in Aba that the man could neither be caught nor killed. The commissioner of police in Abia State, Jonathan Johnson, also told NEXT that the body of the gang leader will be displayed to reassure residents of the state that he was truly dead.

Another source said the task force got closer to Mr Nwankwo two days ago when his accomplice who used to supply him arms was arrested. After his arrest, arms including two GPMGs, three RPG bombers, 20 pieces of RPG bombs, 93 empty magazines of AK47 guns, 150 litre keg filled with live ammunition and eight pieces of AK47 guns, were recovered from the accomplice. Mr. Musa said last night that the body of the notorious kidnapper had been taken to Umuahia to be shown to government officials and would be publicly paraded today in the city. Hundreds of people trooped to the military barracks in Aba last night waiting to see the body, but they left disappointed when the body was not presented. Mr Nwankwo, who was arrested a few months ago, was inexplicably released by the police and since then, had tormented the people, who ascribed daredevil abilities to him. Mr Musa described Osisikankwu’s killing as a landmark achievement of the military operations in the state and promised that the task force will not relent until it flushes out the remaining kidnappers in the area.

State of anarchy
Kidnapping in Abia State reached new heights on July 11th when four journalists and their driver were kidnapped on their way from Uyo, Akwa Ibom State, after attending the National Executive Council meeting of the Nigeria Union of Journalists. Among the journalists was Wahab Alabi Oba, the chairman of the Lagos State Council of the NUJ. The Senate president, David Mark, subsequently demanded that a state of emergency be declared in the state. He also advocated the application of ‘jungle solution’ to the rising level of kidnappings and armed robbery to serve as a deterrent to others, saying the rule of law could not be applied in a jungle situation. Senior officials of the International Police Organisation (INTERPOL) were invited by the federal government to help track down the kidnappers. The journalists were later released although an initial ransom demand of N250 million was not paid.

A few days before the nation’s 50th independence anniversary, gunmen seized 15 primary school children on their way to school. The abductors had contacted the owner of the private school and demanded a N20 million ransom before the children could be released. However, the students were set free on the day of the nation’s independence anniversary. Mr. Nwankwo’s gang was reportedly responsible for the kidnappings.
Source: 234Next – www.234next.com