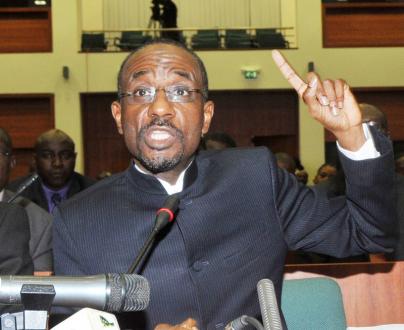 But the House of Representatives panels before whom he appeared said the CBN governor had been feeding Nigerians with misleading figures, probably to spite the lawmakers.

The CBN boss appeared before the House of Representatives Joint Committees on Appropriation, Finance, Banking and Currency; and Drugs, Narcotics and Financial Crimes. He was invited to clarify his comment on the spending of the National Assembly.

Sanusi made the comment during a Convocation Lecture at the Igbinedion University in Okada, Edo State. The CBN governor also appeared before four Committees of the Senate over the same issue last week.

Yesterday, Sanusi expressed disgust over the heat his comment has generated saying, “it is distressing the extent the matter has gone.”

He said the controversy is neither in the interest of the CBN nor the National Assembly.

He explained that the thrust of his lecture was to emphasise the fact that “as a country, we cannot continue to spend our money on recurrent and overheads if we want to develop.”

The panels led by Minority Leader Hon. Mohammed Ali Ndume said contrary to what Sanusi presented at the lecture, Federal Government’s total recurrent expenditure as contained in the 2010 budget was N1.3 trillion against the N536 billion quoted by Sanusi.

Ndume said the National Assembly’s overhead cost which is N136 billion is only 8.9 per cent of Federal Government’s N1.38 trillion total overheads.

He said the investigative committee could not understand why Sanusi failed to use the total of N814.60 billion he (Sanusi) provided for the committee, for his calculation.

But Sanusi said he relied on the Federal Government’s 2011 to 2013 Medium Term Expenditure Framework which the National Assembly approved to arrive at his own calculations.

Sanusi said he had no other motive than to point out the danger of consistent high recurrent and overhead expenditure of government.
Source: The Nation Newspaper – www.thenationonlineng.net