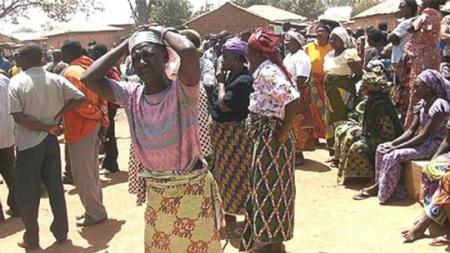 BLOOD flowed again Tuesday on the Plateau. Eighteen people were killed in a dawn attack on two villages in Kuru, near Jos, which has been a flash point of violence.

More troops were also deployed in the city.

No fewer than 84 people died in the Christmas Eve violence last year. Since then, the city has not known peace.

The victims, mostly women and children, were killed in Riyom and Barkin Ladi local government areas by suspected Fulani herdsmen.

Three households lost their entire family members in the dawn attack in which the assailants mutilated the bodies of their victims.

The command’s statement was signed by Assistant Superintendent of Police (ASP) Obinna Simeon on behalf of Police Commissioner Abdularahaman Akano. No arrest has been made, the statement added.

“The killings took place on the outskirts of Jos but our officers and men have moved in to protect lives and properties.

He went on: “We have reinforcement from the 3 Armoured Division and additional troops from the police. Additional vehicles have also been provided for us to enhance patrol in buffer zones.

Asked why it has been difficult to check the violence in Jos, Brig-Gen. Umar said: “The situation is like that of an old cloth. If you try to mend it, it gets torn or perforated in some parts.

“The more we try to quell the crisis in some areas, it erupts in other areas. But we are on top of the situation.”

A statement signed by Mr. James Mannok, the Director of Press to Governor Jonah Jang, said: “The government condemns the attack and condoles with the families of the deceased. The governor also assures citizens that the security is on the red alert to forestall any further breakdown of law and order.”

Another statement by Mr. Istifanus Gyang, Permanent Secretary, Cabinet and Special Duties, after the security meeting, said: “The government expresses deep concern about the attacks on travellers on both federal and state highways in the state.

“In view of this, the council has resolved, that those arrested perpetrating the mayhem are prosecuted to deter further occurrence and check the prevailing culture of impunity.”

The Igbo community in Jos has asked the Federal Government, the Inspector General of Police and the Commander of the STF to fish out killers of 40 Igbo traders massacred during last Saturday’s mayhem in Jos.

The traders, who have shut down their businesses since the Saturday attack, spoke at a news conference yesterday under the umbrella “Igbo Community Association (ICA).”

The President of the association, Chief Richard Wayas, said: “We have lost confidence in the Commandant of the STF, Brig.-Gen. Hassan Umaru, because his men were just watching how Igbo and other Nigerians travelling to Yola, Adamawa state were being massacred.

He went on: “The January 8, 2011 violence in Bauchi Road, Dilimi and Abdulsalami street in Jos stunned us because some Hausa\Fulani youths cordoned the Dilimi and Bauchi Road areas, killing our people. They attacked a Marcopolo bus conveying Nigerians, mostly Igbo traders, to Yola and burnt it down alongside their goods worth millions of naira.

“We are at a loss as to how the unfortunate events that occurred at far away Mangu Local Government Area and at a CPC congress at Islamiyi Primary School, Bauchi Road, Jos will lead to the massacre of innocent and defenceless Igbo men.”

Wayas added: “The Igbo are a peace loving people who do not interfere with the politics of their host communities, but they have become subjects of attacks anytime violence erupts in Plateau State since 2001.

“We don’t think the Hausa Muslims that perpetrated this massacre on us have any justification whatsoever. Their claim that they were protesting the killing of eight men in Mangu is not a justification for the killings of 40 Igbo people. We, the Igbo, condemn this brutal massacre, looting and burning. We seek apology from the killers and demand that they should compensate the families appropriately.”

The group also condemned “the deployment of heavy troops with tanks” to patrol mosques and other known Hausa/Fulani settlements, thereby ignoring other settlements and exposing them to danger, even when we always believe that Nigeria belongs to us all”.

The Igbo community said it was “contemplating the relocation of their businesses from Hausa dominated areas to safer areas within Jos North Local Government Area since we have found out the security agencies in Jos are only protecting the interest of the Hausa and exposing others to attacks”.

Wayas said: “We are, therefore, calling for the unconditional release of all Igbo arrested while trying to defend themselves during the violence unleashed on them.”

Also yesterday, security agents at the Plateau State House of Assembly arrested a man suspected to be in possession of explosives.

He said: “When accosted, the suspect claimed to be going somewhere which had no link with the House of Assembly but when the black polythene bag in his possession was searched, some pieces of cut out cloths and a small tin suspected to contain an explosive was found.”

STF Commander Brig. Gen Umaru promised that the suspect would be thoroughly investigated with a view to finding out his mission.

Italy has condemned the latest round of killings in Jos. Foreign Minister Franco Frattini demanded action from the international community.

“The dramatic news from Nigeria, where once again innocent lives have been destroyed by attacks targeting the Christian community, shows that the phenomenon of religious intolerance is widespread and of a vast scale,” Frattini said.
Source: The Nation Newspaper – thenationonlineng.net