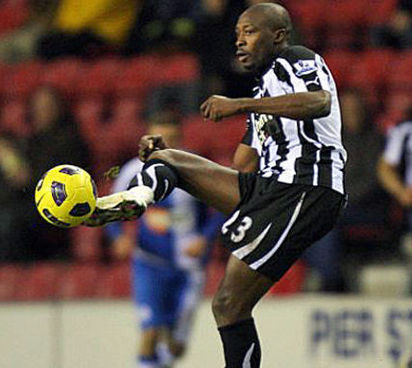 Newcastle forward Shola Ameobi and Wigan winger Victor Moses have both been named in Samson Siasia’s first squad as Nigeria manager for a friendly against Guatemala next month in the USA.

Also named is Karabukspor striker Emmanuel Emenike, who recently committed his international future to Nigeria. Completing the cast of newcomers to the squad are the Italy based duo of Inter Milan’s Obiora Nwankwo and Siena’s Michael Odibe.

Heartland’s Bartholomew Ibenegbu, who scored in a kickabout as Siasia’s local Eagles were held to a 2-2 draw by John Obuh’s Under-20 team on Thursday in Abuja, is one of two players from the domestic league called up by Siasia. The other is full back Chibuzor Okonkwo, who joined Heartland at the start of the campaign from Bayelsa United.

Full back Adefemi Olubayo gets a surprise call up after languishing in the international wilderness in the wake of his club troubles.

Peter Utaka, who has enjoyed a prolific spell in Denmark over the past two seasons, returns to the fold to stake a claim for a permanent position.