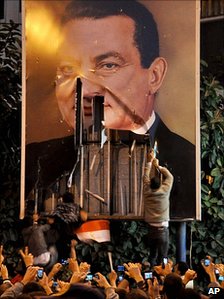 At least three people are reported to have been killed during a day of rare anti-government protests in Egypt.

In Cairo, where the biggest rallies were held, state TV said a policeman had died in clashes. Two protesters died in Suez, doctors there said.

Thousands joined the protests after an internet campaign inspired by the uprising in Tunisia.

In central Cairo, police starting using tear gas early on Wednesday in an attempt to disperse the crowds.

Thousands of demonstrators remained in the city centre around Tahrir Square late into the night, vowing to camp out overnight.

There were appeals on Facebook for food and blankets for those staying put.

But police moved in at 0100 local time (2300 GMT Tuesday), using tear gas and driving protesters into nearby streets, with reports that some people were beaten by police.

As dawn neared, Tahrir Square was reported to be empty of demonstrators, with cleaners removing rocks and litters as police looked on.
Source: news.bbc.co.uk