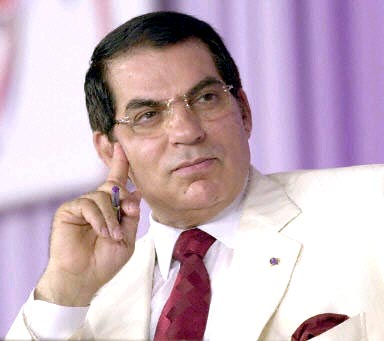 Tunisian President Zine El Abidine Ben Ali fled the country on Friday amid a wave of deadly social protests in a dramatic end to his 23 years in power that is unprecedented for a leader in the Arab world.

Ben Ali signed a decree handing interim presidential powers to Prime Minister Mohammed Ghannouchi and flew out of Tunis bound for an unknown destination after failing to quell growing public anger against his iron-fisted regime.

The source did not give further details on the people who accompanied Ben Ali on the flight.

In an address on state television following a day of riots that engulfed central Tunis and several other towns in the North African state, Ghannouchi announced that he had taken over and promised social and political reforms.

“I call on Tunisians of all political persuasions and from all regions to demonstrate patriotism and unity,” said Ghannouchi, a 69-year-old career bureaucrat who has served as prime minister on and off since 1999.

The government earlier said new elections would be held in six months.

US President Barack Obama hailed the “courage” and “dignity” of Tunisian protesters and called for “free and fair elections in the near future.”

The European Union expressed “support and recognition to the Tunisian people and their democratic aspirations, which should be achieved in a peaceful way.”

Ben Ali came to power in a bloodless coup in 1987 at a time of stagnation for Tunisia and he was initially hailed by many people for enacting liberal economic reforms as well as nipping in the bud the Islamist Ennahdha party.

He has come under growing criticism for authoritarianism and corruption.

Mystery surrounded Ben Ali’s planned final destination and the streets of central Tunis were mostly empty after the announcement, with the silence punctuated by occasional bursts of gunfire heard in the distance.

State television reported numerous cases of looting in Tunis and in other parts of the country and police helicopters mounted with loudspeakers circled in Tunis, calling for calm and urging residents to stay in their homes.

The government has declared a state of emergency following the recent violence and has put in place a dusk-to-dawn curfew across the country under which anyone disobeying orders or fleeing from security forces can be shot.

Analysts said the abrupt change of power was likely to send shockwaves around a region dominated by veteran leaders like the 74-year-old Ben Ali.

The Tunisian president’s departure represents the first time that an Arab leader has been forced to leave office by pressure from public protests.

The rare protests in tightly controlled Tunisia were unleashed by the suicide attempt last month of Mohamed Bouazizi, who set himself on fire after police prevented him from selling fruit and vegetables to make a living.

The 26-year-old graduate died of his injuries in hospital last week.

According to a Paris-based human rights group, at least 66 people have been killed in the protests, about three times higher than the official toll.

Earlier on Friday there were chaotic scenes in the heart of the capital as thousands of people massed to denounce the killings of protesters and to call on Ben Ali to step down. “Ben Ali is an assassin!” they chanted.

Riots later broke out, with protesters hurling rocks at police and starting fires in the streets as security forces fired volleys of tear gas.

Protesters even gathered outside the interior ministry, a hated symbol of Ben Ali’s rule, where they paid tribute to the “blood of the martyrs”.

Similar scenes were repeated in other cities across Tunisia.

Soldiers have been deployed at strategic points around Tunis in recent days and the army has taken control of the main international airport in the city.

In an attempt to appease the protests in recent days, Ben Ali had sacked some regime loyalists and promised to stand down at the end of his current mandate in 2014, as well as to lower the prices of basic foodstuffs.

But his promises ultimately failed to quell the anger in the streets.

“We just want democracy,” said 24-year-old Hosni, a hotel worker with his face wrapped in a Tunisian flag against the tear gas.

Moncef Ben Mrad, the editor of an independent newspaper, said: “This is a demonstration of hope.

“It is the birth of a people who demand more freedom and that the families that have looted the country return the wealth and are called to account.”

Adel Ouni, a 36-year-old diplomat, said the scale of the protests was unprecedented for Tunisia.

“I’ve never seen anything like this. This is our chance. We’ll never have another chance like this,” Ouni said.

“This is a social revolution,” he added.

Meanwhile thousands of holidaymakers have been evacuated from the Mediterranean nation’s beach resorts, and Europe and the United States have advised their citizens against non-essential travel to the country.

Tour operator Thomas Cook said around 2,000 German holidaymakers were being repatriated due to the violence, while a further 1,800 from Britain and Ireland were being flown home and 540 were set to return to Belgium.

Thomas Cook said three flights from the northeastern resort of Monastir had landed in Britain and it was pressing ahead with three more.

TUI Travel said it was bringing more than 1,500 customers back to Britain from Tunisia, where tourism plays a major role in the economy.
Source: AfricAsia – www.africasia.com