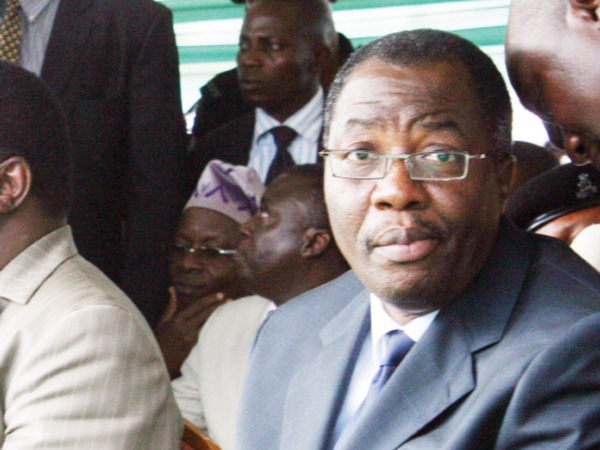 “We are in a marathon war, and in this particular fight, we will fight it to its logical conclusion.”

That was the pronouncement made by the Governor of Ogun State Gbenga Daniel yesterday as he addressed supporters at the inauguration of campaign committees held at Valley View auditorium in the government house, Abeokuta.

Two factions headed by Mr. Daniel and former Nigerian president, Olusegun Obasanjo, held parallel primaries to select the People’s Democratic Party candidates for the forthcoming general elections in the state. Tunji Olurin had emerged as the PDP gubernatorial candidate for the Obasanjo faction while Gboyega Isiaka was elected in Mr. Daniel’s faction. Now both groups are embattled in a series of legal suits to determine who will ultimately get the top nominee spot.

“We have started this war since 2006,” the governor told his supporters, “and I want you to shine your eyes.”

The governor claimed he had done everything possible to appease the Obasanjo faction of the PDP, “yet the camp had remained difficult”.

“Therefore, at the stage the situation gets now, you cannot be in the river and complain of cold,” Mr. Daniel said.

He added that those pushing Tunji Olurin to become governor, knew that he (Olurin) could not win an election even in his Ilaro hometown.

“They even used opposition media to fight us, an indication that they are working together with [the] opposition party to destroy our party and later move out,” said the governor.

Continuing the allegations against Mr. Obasanjo’s faction, Mr. Daniel said that the political war against him started in 2006, with the stealing of his administration vouchers as a way to implicate him. The governor recalled that a number of his cabinet members were quizzed by the Economic Financial Crimes Commision (EFCC), but eventually came out unscathed.

“Those who steal vouchers to nail me, where are they today?” he said. “We were harassed and intimidated, but God was on our side. I am not personally surprised with what we are witnessing today. You should not be shocked because of what we have been facing.”

Insisting that his camp would produce all the candidates to contest the elections, Mr. Daniel who also sang some Yoruba war songs, assured his supporters that “by May 29, we will successfully transit to the government of our choice.”
Source: 234next.com