The incident occurred after the final whistle in Milan’s 1-0 Champions League first-leg defeat by Spurs in their last-16 tie at the San Siro.

Italy international and ex-Rangers man Gattuso has since apologised.

“I lost control. There is no excuse for what I did. I take my responsibilities for that,” the Milan captain, 33, said.

“I was nervous. We were both speaking Scottish, something that I learned when I played in his home city of Glasgow, but I can’t tell you what we said.

Jordan and Gattuso were engaged in a furious row on the touchline
“I didn’t want to argue with players and I did it with him, but I was wrong to do what I have done. I will have to await what they decide.”

Midfielder Gattuso and 59-year-old Scot Jordan had already clashed on the touchline during a bad-tempered second half in which Mathieu Flamini escaped with a only booking for a two-footed challenge on Vedran Corluka.

Croatia full-back Corluka left the field on a stretcher and was later seen on the substitutes’ bench with crutches and an ice pack on his ankle.

“The tackle from Flamini was a horrendous tackle,” Tottenham boss Harry Redknapp commented. “It was a sending off. He was two or three feet off the floor with his two feet raised.

“It was a leg-breaking tackle. Corluka will have an X-ray but I don’t think he has broken it but he could have done easily.”

He obviously hadn’t done his homework. He could’ve picked a fight with somebody else

The Flamini challenge turned the second half into a feisty affair, with Gattuso becoming increasingly aggressive.

The former Rangers favourite, making his 450th appearance for the Rossoneri, confronted Spurs striker Peter Crouch before collecting a booking that will rule him out of the second leg for a lunge at Steven Pienaar.

At the final whistle, Gattuso removed his shirt and headed straight for Jordan, hurling abuse at the Spurs first-team coach before lashing out with his head.

The Milan midfielder was pulled away by team-mates and briefly stopped to embrace Spurs defender William Gallas before following Jordan down the tunnel.

Corluka left the field on a stretcher after a crunching tackle from Flamini
“He obviously hadn’t done his homework. He could’ve picked a fight with somebody else. Putting his head into Joe’s face, it was crazy. He lost his head.”

Milan boss Massimiliano Allegri said he was disappointed with his captain’s conduct but claimed his rage was sparked by a late tackle on him by Pienaar which preceded the touchline clash with Jordan.

“Flamini’s tackle was quite a bad one but the foul on Gattuso on his knee was also a bad one,” Allegri stated.

“I don’t know what happened at the end of the match. It was not nice to see. I think there was a reason but there is no excuse for that.”

Italian football journalist Gabriele Marcotti added: “Gattuso is an emotional player but after getting angry he calmed down enough to hug and kiss William Gallas and Harry Redknapp.

“You think he is going to calm down then he goes after Joe Jordan. Absolutely incredible.”

Redknapp joked that it was not wise to pick a fight with Jordan, who played for AC Milan between 1981 and 1983 after long spells with Leeds and Manchester United.

“There would be only one winner there – Joe,” the 63-year-old Spurs said. “I’d have my money on Joe. Of all the people to pick on, don’t pick on Joe.” 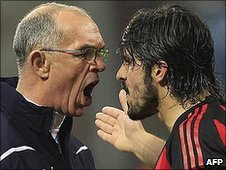