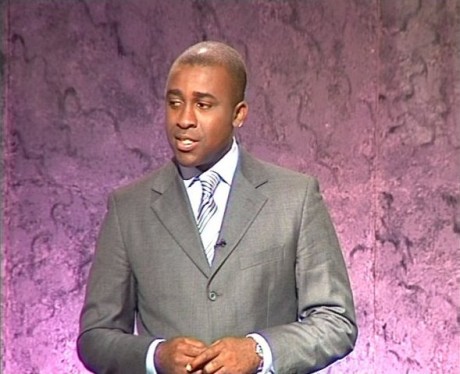 “I read about it yesterday. It is not true at all. I am a journalist myself. My marriage and private affairs are nobody’s business. What you need to know about me is just my career, my TV show and my upcoming radio venture. For now, I’m not going to tell anybody about my family life or private life,”
Those are the lamentations of Frank Edoho, the host of the popular TV show “Who Wants To Be A Millionaire” about the rumored separation from his wife, Katherine.
There has been a speculation that the couple was having problems with their marriage and the TV host has moved out of their matrimonial home.
Reiterating his earlier position the through a telephone conversation with news magazine, a furious Frank said:
‘I’m just calling you back because I’m like a colleague. The only thing I can say now is that there is nothing like that. I do not know where the rumor is coming from. Nobody has any right to ask me about my family so I am not going to answer again. I am just showing you guys respect. Many people have called me and I have told them that nothing is going on. I’m still with my family and still married to my dear wife,’
Talking about the impact the malicious news is having on his wife, he said; “These journalists should just leave my wife alone; she’s undergoing too much stress. People have been calling her for like two days now and its getting to her because she’s taking care of my children. That’s all I want you to put out there,” he concluded.