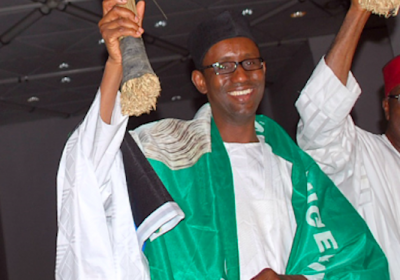 Former military President, Ibrahim Babangida, on Sunday endorsed Nuhu Ribadu for President, saying Nigeria needs generational change.
But Ribadu, a member of the Action Congress of Nigeria (ACN), was received at Babangida’s Hilltop Mansion without ACN leader, Bola Tinubu.
Babangida told journalists that because of the generation Ribadu belongs to, it is fair to support him take over the reigns of power, a view he said other Nigerians will understand and respect.
He recalled that, “Somebody asked me recently who my candidate is and I said that we who belong to this generation will like to see young people, in whose hands the future of this country lies, to take over the affairs of Nigeria.”
He explained that he supports generational change, “which Nuhu Ribadu and Fola Adeola stand for,” and he has strong faith in them and believes they can deliver.
Asked if he has endorsed the candidature of Ribadu, Babangida who had wanted to run for President himself under the platform of the Peoples Democratic Party (PDP), said: “For generational change, yes.”
He referred to everyone on Ribadus’ entourage as his friends, and said he gave them lunch as a sign of acceptance and friendship between him and the ACN family.
“I am close to them, it is only fair that since they are in Minna they decided to visit me personally. I have respect for him (Ribadu).”
Ribadu and his team also visited the Emir of Minna, Umar Bahago, after which they addressed a rally at the city’s polo ground.
He told the rally that the ACN stands for the change Nigerians have yearned for in the 12 years of misrule by the PDP administration.
“The change has come and your party, our party, the ACN, is the party to vote for. We are set to provide this much needed change and take the country to higher grounds,” he said.
Source: Daily Independent – www.independentngonline.com