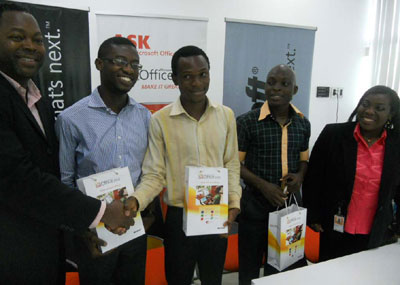 The global software giant, Microsoft, Tuesday, in Lagos announced opening of entries for the 2011 Imagine Cup students software competition for students in the tertiary institutions across the nation.
The Imagine Cup, according to Microsoft, invites students in Nigeria to learn, collaborate and change the world by applying their imagination, passion and creativity to technology innovations.
To lend students with inspiration for their Imagine Cup entries, Microsoft has also invited intergovernmental organizations (IGOs), non governmental organizations (NGOs), and non-profits for the first time to submit real problems for the students to consider for their projects, through a new program called Imagine Cup Solve.
Speaking to newsmen yesterday to unfold plans for this year’s competition, Dele Akinsade, Technology Lead, Microsoft Anglophone West Africa said that what begins with a burst of inspiration and a lot of hard work can become a future software breakthrough, a jump start for a career, or a flourishing new industry.
According to him, the software competition is opened to students in tertiary institution who can use their creative software products to solve the toughest world problems.
“These organizations recognize that technology solutions can expand the reach of their services and help them more effectively meet the needs of their audiences, while Microsoft can help provide a marketplace of ideas that students can select to address issues that matter most to them,” Ngozi Ife Anene, PR & Communications Lead for Microsoft Anglophone West Africa said.
For the Nigerian representatives at the world finals last year in Poland, it was a good exposure. “Representing Nigeria at the Imagine Cup finals in 2010 was a great experience”, Adeboye Oshinaga, member of Team Indwell, said, adding that, “Not only were we able to showcase our knowledge and use of innovative software, we were able to network with other students from around the world and learn more about software development from a global perspective. We plan to participate again this year and win the finals for Nigeria”.
Now in its ninth year, the Imagine Cup has grown to become the world’s premier student technology competition with more than 325,000 students representing 100 countries participating in last year’s event.
With a competition theme inspired by the United Nations Millennium Development Goals to “Imagine a world where technology helps solve the toughest problems,” the Imagine Cup spans one year, beginning with local, regional and online contests, before the Worldwide Finals take place in New York City, USA in July 2011.
In Nigeria, the local Imagine Cup will take place May 2011 and students, currently enrolled in tertiary institutions and between 17-26 years of age, are encouraged to register their entries in the main categories of: Software Design, Embedded Development, Game Design, Digital Media and Windows Phone 7.
It would be recalled that in 2010, the Nigeria Imagine Cup finals was won by Team Indwell, a team of three students from Obafemi Awolowo University.
The team represented Nigeria at the global finals which held in Warsaw, Poland in July 2010. To commend their efforts at the global finals, the team were presented with Windows 7 phones at a media briefing which held today at the Microsoft office in
The winning Imagine Cup team from Nigeria will have the opportunity to travel to the Worldwide Finals in New York, where they will join the brightest young minds to compete on the world stage.
Like the three students from Obafemi Awolowo University that represented Nigeria at the Worldwide Finals in Poland last year, the 2011 competitors will gain real life experience, make new friends, and harness the power of technology to take on the world’s toughest problems.
As an example of the type of real-world solutions the Imagine Cup judges are looking for, in 2010, the winning team at the Worldwide Finals from Thailand developed a project that would help the hearing-impaired communicate in the classroom.
By Emeka Aginam
Vanguard Newspapers