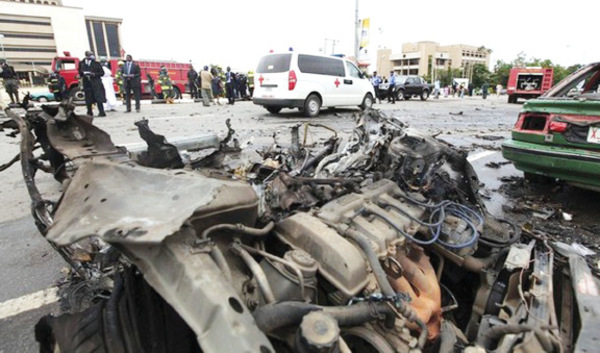 An explosion has been reported at the Independent National Electoral Commission Office in Suleja, Niger state.

About 20 people, many of them Youth Corps members, who had gone to the INEC office to check their names and postings against tomorrow’s polls, were reportedly victims of the blast.

The cause of the explosion is not yet known but other victims of the explosion at the Kwamba office include INEC officials who had come to take possession of the voting materials. Eyewitnesses say that the explosion occurred less than than two hours after electoral materials were delivered to the office amidst a security convoy.

Other unconfirmed dead include party agents and officials who had gone there to witness the arrival of the materials.

It was not immediately clear how many people were injured although many of the wounded have been taken to the Suleja General hospital.

When NEXT contacted the state’s Police Public Relatios officer, Richard ADAMU Oguche he said, ” I am driving there now. Please i need to see the place before i can talk to you.”

Yesterday the electoral commission had announced that parliamentary voting had been postponed place in the Niger South senatorial district as well as the Bida/Gbako/Katcha and Lavun/Edasi/Mokwa federal constituencies. The commission has not yet announced if the Friday evening blast would force a further curtailment of the elections.