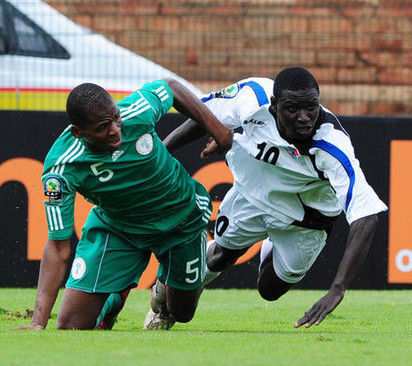 It was not the most convincing of performances, but goals from substitute Stanley Okoro and skipper Ramon Azeez secured a comfortable 2-0 win for Nigeria against Gambia.

It was the result that the Flying Eagles needed to advance, irrespective of what happened in the other game, where Ghana could only manage a 1-1 draw against Cameroon.

But it was not the straightforward game that many expected. The Flying Eagles dominated the first half, but found penetration difficult against a sturdy Gambian defence. The Gambians for their part, were fancying their chances on the quick breaks, troubling the Nigerian back line on transitions.

Chances fell to the likes of Chidi Osuchukwu, Kayode Olanrewaju, Ramon Azeez and Abduljeleel Ajagun, but they failed to take advantage despite an impressive tally of 11 shots to Gambia’s four.

John Obuh threw on Okoro for Olanrewaju in the second half, and the substitute wasted little time to make his mark.

Suswan’s long throw in was not cleared far away. As the ball bobbed around the box, Azeez slid it through for Okoro, who kept his balance enough to squeeze the ball beyond the keeper.

Ten minutes later, it was Azeez who put the game beyond doubt. Ajagun won a free lick on the edge of the area, and then laid the ball for the skipper, who belted his shot past the goalkeeper.