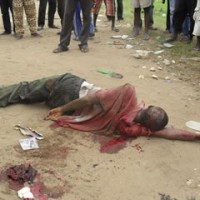 LESS than 24 hours after a Divisional Police Officer (DPO) and a Divisional Crime Officer (DCO) were killed by some rampaging soldiers in Lagos, the blood of some innocent Nigerians were again shed yesterday, allegedly by some policemen detailed to guard the Isheri-end of the Lagos/Ibadan Expressway.
For the refusal of the driver of a commercial bus to part with N100, three mobile policemen opened fire on the bus, killing and injuring some of the passengers.
Some passersby cried when they saw one of the dead victims on the ground at OPIC Bus Stop with his brains out. He was drenched in his own blood.
A woman passenger was shot in the eyes while another passenger had his hand shattered by bullets.
They were rushed to an undisclosed hospital.
Angry residents took the body of the victim with shattered head to the front of a popular building in the area, looking for the policemen who, by then, had fled.
One of the passengers, Adeseye Oladimeji, told the Nigerian Compass that the white bus with registration number, XU 163 SMK, left Ojota for Ibafo with about eight passengers before the attack. Bullet holes were seen on the body of the bus.

Said Oladimeji: “I thank God that I am alive. Look at me, I am not hurt yet blood is all over my body. It is the blood of other passengers. We boarded the bus from Ojota, heading to Ibafo. When we got to OPIC junction, we were surprised to see a check-point. The mobile policemen were three in number.

“They asked the driver to give them N100 and the driver pleaded with them that he just came out and that he would see them later. One of them asked him to go, and at a very close range, they started shooting at us. Besides this man on the ground, I can tell you that almost four persons are at the verge of death while one woman was hit by a bullet in her eyes. For another who may survive, his hand was shattered by bullets, among others.”
When the Nigeria Compass called the Ogun State Police Command Public Relations Officer, Mr. Muyiwa Adejobi, he expressed shock and promised to investigate the incident.
SOURCE: Nigerian Compass