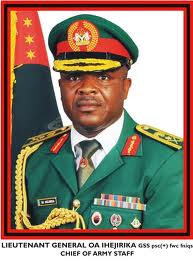 The two police officers a divisional Police Officer and his crime officer were said to have gone to the army barracks on a peace mission to see their Commanding Officer over the alleged killing of a soldier by the police earlier but were later ambushed and allegedly killed by the soldiers on their way home.

The Director, Army Public Relations (DAPR), Brig. Gen. Raphael Isa, told newsmen in Abuja that soldiers were not responsible for the deaths even before the commencement of the joint investigative panel constituted on the directive of the COAS.

According to him, if the soldiers were involved in the killings, inventory of ammunition would have exposed the culprits by now.

Isa, who expressed concerns on the manner of the report by some section of the media, regretted that such reports unfortunately bring the name of the Nigerian Army into disrepute by portraying it as barbaric and murderous.

“Let me state categorically clear that no Nigerian soldier was involved in that incidence in Badagary.

“Again, all soldiers were confined to barracks as at the time the incidence was reported, that is, they were being addressed by the Commanding Officer at that time. So there was no case of having a soldier outside the barracks at that time not to talk of accusing him of shooting someone.

“Soldiers of Nigerian Army do not have ammunition to waste unaccounted for, and so if a soldier shoots anybody outside, he must account for that ammunition when he goes back. We don’t waste our ammunition, they are accounted for.

“That is to say, truly, if a soldier did the shooting, then the soldier must be known by now. It means there will be shortfalls in the allocation of his ammunition,” he added.

He also faulted the manner of the killings, saying, “Soldiers do no go matcheting after shooting somebody dead. Reports we got was that the bodies of the deceased were matcheted. It is not our training.”

Besides, he pointed out that there was also a reports of bloody civil unrest that morning in Badagary by truck drivers association and the police around Gbagi police check point along Badagary-Seme express “which the police handled that morning,”.

Though he refused to divulge the terms of reference and timeline for the conclusion of the investigation, the DAPR however assured that such information would be made available soon.

Underscoring the fact that soldiers of the Nigerian Army have always been professional in their conducts within and without the barracks, the Army Spokesman noted that it was not characteristic of the Army to carry our reprisal attack on account of earlier killing of Army Sergeant killed at a Badagary check point by the police.

“Such would never happen, as a matter of fact, there are over 160 police families living in the barracks. Our relationship has always been cordial and it will remain cordial.

“When the staff sergeant was shot by a policeman around Badagry roundabout some days ago, it will interest you to know that the men of Operation MESA, mostly Nigeria Army personnel, were at a very close range and rather than taking laws into their hands, they only arrested those who opened fire and killed the soldier to safe custody.

“As event unfolds, it will also interest you to know that those suspects were still being held, they are safe, the suspects are still there.

“I want to confirm again that there were no reprisals of any kind since that day. It is only the figment of imagination of those who expected that there might be reprisal attack by the Nigerian Army; unfortunately that was not the case,” he added.

The Army image-maker however assured of continued cordial relationships with sister security agencies, saying, “For now, I want to assure all that the Nigerian Army will continue to explore all avenues that make for better cooperation with sister security services rather than being distracted by any sensational and baseless claim.”