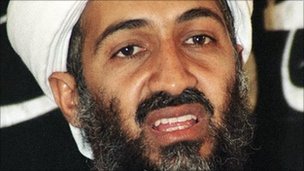 Al-Qaeda leader Osama Bin Laden has been killed by US forces in Pakistan, President Barack Obama has said.

Bin Laden was killed in a ground operation outside Islamabad based on US intelligence, the first lead for which emerged last August.

Mr Obama said after “a firefight”, US forces took possession of his body.

Bin Laden was accused of being behind a number of atrocities, including the attacks on New York and Washington on 11 September 2001.

He was top of the US’ “most wanted” list.

Mr Obama said it was “the most significant achievement to date in our nation’s effort to defeat al-Qaeda”.

The US has put its embassies around the world on alert, warning Americans of the possibility of al-Qaeda reprisal attacks for Bin Laden’s killing.

Crowds gathered outside the White House in Washington DC, chanting “USA, USA” after the news emerged.

A US official quoted by Associated Press news agency said Bin Laden’s body had been buried at sea, although this has not been confirmed.

Bin Laden had approved the 9/11 attacks in which nearly 3,000 people died.
He evaded the forces of the US and its allies for almost a decade, despite a $25m bounty on his head.

Mr Obama said he had been briefed last August on a possible lead to Bin Laden’s whereabouts.

“It was far from certain, and it took many months to run this thread to ground,” Mr Obama said.

“I met repeatedly with my national security team as we developed more information about the possibility that we had located Bin Laden hiding within a compound deep inside of Pakistan.

“And finally, last week, I determined that we had enough intelligence to take action, and authorised an operation to get Osama Bin Laden and bring him to justice,” the president said.
On Sunday a team of US forces undertook the operation in Abbottabad, 100km (62 miles) north-east of Islamabad.

After a “firefight” Bin Laden was killed and his body taken by US forces, the president said.

Giving more details of the operation, a senior US official said a small US team had conducted the raid in about 40 minutes.

One helicopter was lost due to “technical failure”. The team destroyed it and left in its other aircraft.

Three other men were killed in the raid – one of Bin Laden’s sons and two couriers – the official said, adding that one woman was also killed when she was used as “a shield” and two other women were injured.

The size and complexity of the structure in Abbottabad had “shocked” US officials.

It had 4m-6m (12ft-18ft) walls, was eight times larger than other homes in the area and was valued at “several million dollars”, though it had no telephone or internet connection.

The US official said that intelligence had been tracking a “trusted courier” of Bin Laden for many years. The courier’s identity was discovered four years ago, his area of operation two years ago and then, last August, his residence in Abbottabad was found, triggering the start of the mission.

Another senior US official said that no intelligence had been shared with any country, including Pakistan, ahead of the raid.

“Only a very small group of people inside our own government knew of this operation in advance,” the official said.

The Abbottabad residence is just 700m (800 yards) from the Pakistan Military Academy – the country’s equivalent of West Point.

The senior US official warned that the possibility of revenge attacks had now created “a heightened threat to the homeland and to US citizens and facilities abroad”.

But the official added that “the loss of Bin Laden puts the group on a path of decline that will be difficult to reverse”.

He said Bin Laden’s probable successor, Ayman al-Zawahiri, was “far less charismatic and not as well respected within the organisation”, according to reports from captured al-Qaeda operatives.
Source: bbc.co.uk