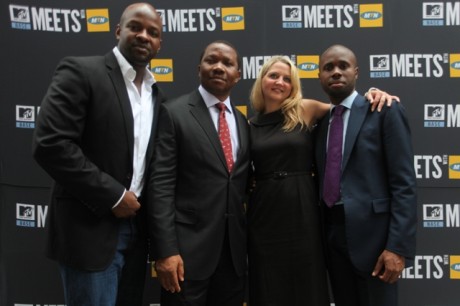 MTV Networks Africa and MTN have joined forces in a groundbreaking pan-African multimedia campaign designed to inspire African youth by connecting them with some of the world’s most influential people.

Young people all over the world are steadily taking interest in national and global affairs, and are increasingly becoming vocal on issues that affect them and the world they live in.

The Pan-African broadcaster and one of Africa’s biggest mobile operators are coming together to produce MTV Base Meets…with MTN, an 8-part youth empowerment initiative and TV series that creates a dialogue between young people and the political, business and cultural leaders who shape the world today.

The intimate documentary series will allow Africa’s young minds to ask influential, inspirational and sometimes controversial individuals vital and probing questions. Among the eminent people who will feature in the series are Liberian President Madame Ellen Johnson-Sirleaf (Africa’s first and only elected female head of state), Mr Paul Kagame, President of Rwanda and South African politician Mr Julius Malema (President of the ANC Youth League) and many African leaders or influencers who exercise a significant impact on the continent.

The captivating series will keep television viewers – young and old – on the edge of their seats. A diverse panel of young people representing different youth interests will be put together from across the African continent, with participants coming from Cameroon, Ghana, Liberia, Nigeria, Zimbabwe, Rwanda, South Africa and Uganda, among others.

Young, but well-informed, the panellists are articulate, engaging, provocative and opinionated on a range of intricate subjects – be it HIV/AIDS, global warming, education, poverty, corruption or entrepreneurship. They are fearless and have attitude. Their no-holds-barred approach will make for exciting television viewing as they fire BIG questions to the influential people whose actions and opinions have a direct impact on their lives.

‘MTV base Meets…with MTN provides young people with the opportunity to engage directly with decision-makers and world leaders in order to address some of the key issues that are important to them. The initiative demonstrates our belief in the positive impact that the youth can have in shaping the future of the Continent. We hope that MTV base Meets…with MTN will inspire young people across Africa to know that their voice matters and to help prepare them to take their own roles among the leaders of tomorrow’, Senior Vice President & Managing Director, MTV Networks Africa, Alex Okosi explains

And as a way of bringing about interaction between the captivating series and viewers at home, African youth will be encouraged to nominate influencers and submit their proposed questions for the programme via a dedicated MTV base Meets…with MTN website or via their mobile handset.