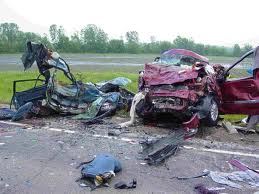 The World Health Organisation (WHO) has declared that over 1.3million people are killed yearly from road traffic accidents, with Nigeria currently ranking 191 of the 192 countries in the world with unsafe roads.

Corps Marshal and Chief Executive of the Federal Road Safety Commission (FRSC), Osita Chidoka, who disclosed this in Benin on Wednesday at the national launching of the United Nations Decade of Action on Road Safety, noted that over 80 per cent of the figure occurs in developing countries, with Africa accounting for the highest death rate.

According to him, with 162 death rates from road traffic accidents per 100,000 populations, Nigeria currently ranks 191 of the 192 countries in the world with unsafe roads, while over 50 million people sustain different degrees of injuries from such crashes.

Represented by Yakubu Atta, Zonal Coordinator of the FRSC, Chidoka noted that WHO has predicted that if nothing was done by countries to stem the tide, death by RTA would increase by 65 per cent by 2015/2020, overtaking malaria and tuberculosis.