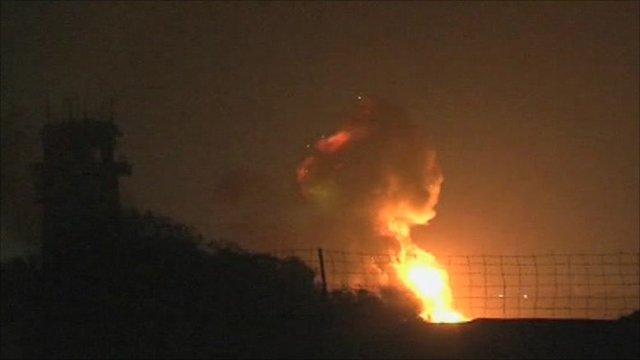 Gunmen have attacked a military base in the Pakistani city of Karachi, killing at least 11 soldiers, officials say.

The well-armed attackers set off explosives and have been fighting gunbattles with navy personnel at the Mehran naval aviation base.

The gunmen are now holding hostages, including Chinese military personnel.

No group has claimed the raid, but the Pakistani Taliban have vowed to avenge the killing of Osama Bin Laden by US special forces on 2 May.

They have carried out several attacks since then.

Battle continues
On Sunday militants stormed three hangars housing aircraft at the Mehran base, according to officials.

Interior Minister Rehman Malik said: “We have been able to confine them to one building and an operation is underway either to kill or capture them.”
Flames can be seen in the distance, and intermittent gunfire continues as troops battle the militants inside, says the BBC’s Syed Shoaib Hasan at the scene.

Their first targets were aircraft parked on the tarmac and equipment in nearby hangers.

At least two of these multi-million dollar aircraft were set ablaze.

The gunmen then opened indiscriminate fire, killing several naval personnel as they carried their deadly raid into the heart of the base.

Some of the militants have now been killed, officials say.

The remaining gunmen have taken several officials, including Chinese military personnel, hostage inside a building. Security officials say commandos are now being sent in to clear this area.

On Friday the Taliban bombed a US consulate convoy in Peshawar, killing one Pakistani.

Other attacks by Pakistani militants this month include a raid on a security post that killed two police in the north-west and a twin suicide bombing at a paramilitary police training centre.
Source: BBC News