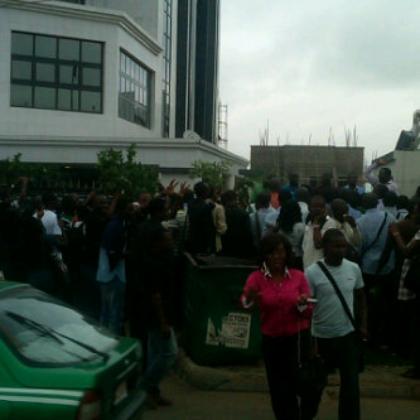 The agents whose protests disrupted the free flow of traffic around the vicinity
said they were further irked when they were paid half salaries for May, despite
working diligently to meet up with work average of answering over 160
customer care per shift of about 6 hours.

The protesters said the Indian managers seemed not to be fulfilled as they
recently announced plans to increase work time for the agents from 6 to 10
hours, with no corresponding increase in their remuneration.

“These Indians have no human feeling at all. They give us poor salaries, and
as if unsatisfied, they want to extend our working hrs from 6hrs to 10hrs.
Operating systems and applications are outdated and frustrating. They have
reduced off days from 2 days to 1day, they don’t want us to have workers
union, and they gave us no identity cards, no staff lines, no medicals or other
benefits.

“We are just being maltreated in silence. We cannot take this any longer
because they won’t allow foreigners do this to them in their country. We beg
the government and relevant agencies to come to our aid for proper
regulation.” -an angry call agent said.

Reports say the Indian coy, Spanco, is said to be at loggerheads with
recruiting agencies, Hrindexx, CCSNLand Bezaleel over who controls
recruitment and is on the verge of terminating contracts before expiration,
after exploiting call agents to make stupendous profits in the telecoms sector.
Source: Africanexaminer.com