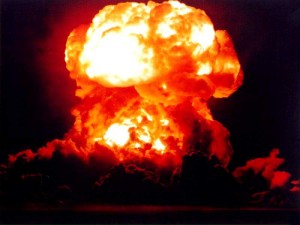 A comedian once said when Nigerians learn something new they tend to overdo it, the issue of bomb explosions is certainly no different. Just think about it: When GSM phones first gained popularity, people stopped cross the roads properly or paying attention while driving, when the use of internet gained popularity Yahoo-yahoo became a full-time job. Even now we haven’t recovered from the plague of black berry phones. Sadly Nigerians have now learnt how to create large fires from small boxes and are practicing it everywhere.

When the Niger-Delta crisis started, people were getting kidnapped and sometimes gun battles ensued between the militants and Nigerian security forces. At that time the only kind of explosion Nigeria was familiar with was that which resulted from tanker accidents or oil pipe vandalization.

Today things have changed seriously. Since the Umar Farouk Abdulmutallab incident, Nigeria has experienced a barrage of bomb blasts within the country, nowadays there is at least one bomb explosion or another on an almost weekly basis. Amazingly many haven’t learn’t from Abdulmutallab’s mistake – Never detonate a bomb while it’s still in your crotch, like the fellows who tried to plant a bomb near a church in Plateau State on the 20th March, 2011 but got shred to bits for detonating it on themselves while they were still on a bike.

An English idiom says – One should not cut off one’s nose to spite the face. Nigerians need to realize that recourse to bombs with serve no purpose besides the destruction of our already dilapidated national heritage, for whatever reasons such measures have been adopted whether on political, ethnic or spiritual grounds it cannot bring about any peace or lasting change.

If we choose to fight fire for fire, we will all end up in ashes.