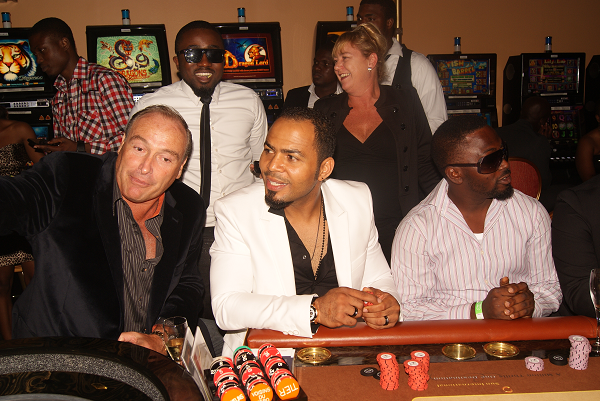 Lagos- (June 16, 2011) – It was a night of glitz & glamour as Federal Palace Hotel & Casino hosted the likes of Ramsey Nouah, M.I & the Choc boyz crew, eLDee the Don, Banky W and the EME crew, Sound Sultan, Julius Agwu, Ali Baba, Tee-A, Funke Akindele, Kenny Ogungbe and much more at the season 006Fne of its Celebrity Casino Learner’s Night. The event was held in conjunction with the Nigeria Entertainment Awards (NEA) which also served as a nomines party for the 2011 NEA Awards in New York City, this September.

In the course of the evening, the celebrities took their first gaming lessons at the slots machines and poker/black jack tables and later expressed their joy and excitement at the very relaxing nature of gaming at the Federal Palace Casino.

David Kliegl, General Manager Nigeria, Sun International, who expressed delight at hosting this quarterly event, said that it served as a means of showing Lagos that Federal Palace Hotel & Casino is the entertainment destination of choice; a million thrills, one destination. “We will continue to showcase our world class casino as an up-market alternative entertainment destination in Lagos.” He added that the hotel’s collaboration with the NEA greatly added to the success of the maiden edition and looks forward to many more of such collaborations in the future.

About Federal Palace Hotel and Casino
Sun International Limited invests in and manages businesses in the hotel, resort and casino industry.
The group is specifically focused on the development, operation and management of hotels, resorts and casinos.
About NEA
The Nigeria Entertainment Award (NEA) is an annual event that takes place in the United States that focuses on recognizing the many contributions of Nigerian Entertainers in and around the globe.

Note: Information Nigeria is a media partner of the 2011 Nigerian Entertainment Awards