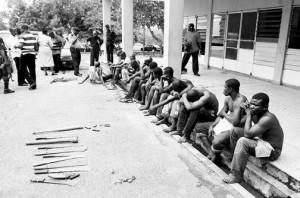 No fewer than two persons were reportedly killed while 15 others were injured in Ibadan, Oyo State capital, on Monday as violence broke out again in some parts of the metropolis among factional members of the state council of the National Union of Road Transport Workers. Scores of vehicles were also vandalized by rampaging hoodlums who wielded guns, machetes, clubs and broken bottles. Areas mostly affected by the clash, which was characterized by sporadic shootings, included the popular motor parks in Iwo Road and Ojoo.

The Oyo State chapter of the NURTW has been enmeshed in leadership tussle since 2009, leading to its proscription by former Governor Adebayo Alao-Akala in August 2010. The Monday clash occurred barely 24 hours after Governor Abiola Ajimobi vowed that his administration would not condone any acts of violence and brigandage in the state.It also came few days after Alao-Akala de-proscribed the union at the twilight of his administration’s tenure.

Our correspondent gathered that the violence broke out when some members of the union loyal to the court-reinstated chairman, Alhaji Lateef Akinsola (a.k.a Tokyo,) attempted to dislodge members of another faction loyal to Mr. Mukaila Lamidi (a.ka. Auxilliary) from motor parks in the affected areas. The attempt was allegedly resisted by the Lamidi faction, leading to the gun duel. As the news of the violence spread around the state capital, panic-stricken residents quickly vacated affected areas while motorists made detour to other routes.

Normalcy was however later restored to the trouble spots when policemen were drafted to the scene.The state Commissioner of Police, Mr. Adisa Bolanta, told journalists that 15 suspects were arrested in connection with the unrest. The suspects were paraded before journalists on Monday. One suspect who was said to have been shot during a confrontation with policemen however died before the suspects arrived the command’s headquarters in Eleyele where they were paraded.

Items recovered from the suspects included 10 machetes, axes and assorted charms. Three of their operational vehicles were also impounded by the police. Bolanta said that the deceased was threatening policemen with blood-stained machete when he was shot. He also confirmed that another suspect was shot in the leg when he was attempting to evade arrest. The police boss gave the names of those arrested to include Wasiu Muibi, Opeyemi Ogunjimi, Olatunji Lawal, Sunday Omilani, Wale Ajayi, Olayemi Omooluwa, Rilwan Muritala, Taofeek Babalola, Adam Rasheed, Olatunbosun Mufutau, Muniru Oladejo, Abass Ganiyu, Saheed Adekunle, Dauda Kolawole and Bashiru Ibrahim. Meanwhile, Ajimobi has directed Bolanta to ensure that all those connected with the breakdown of law and order are apprehended.

A statement from the Governor’s Office said that the police boss should go all out for the perpetrators no matter their connection or status.