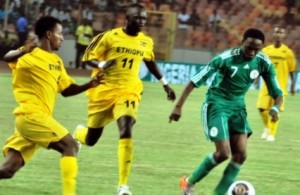 In light of the Super Eagles’s victory against the Argentine team, the Nigerian side has received accolades from different quarters as well as showers of gifts from influential Nigerians and organizations. In view of the quality of game played by the Super Eagles and the high expectations of Nigerians. The onus rest on the Super Eagles not just to claim victory over the Ethiopian side tomorrow but to prove that their performance against Argentina was not a fluke.

This is not the first time that the Super Eagles have recorded an excellent performance against a formidable side, unfortunately such good fortune is often followed by a barely-average performance in a subsequent match. The Super Eagles have been said to have a tendency to underrate opposing sides and after such phenomenal victory against a soccer giant, the odds are high that the Eagles may consider Ethiopia to be negligible opposition. The Nigerian team already has a 4-0 lead against the Argentine team and fears are that the Nigerian side may put up a lusterless performance.

The pressure is on Siasia to show that he can indeed curtail any excesses from his team and channel them in the right frame of mind to achieve the anticipated success.