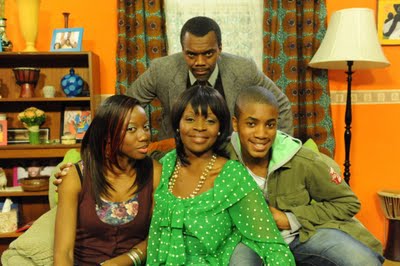 You have had African American and Nollywood for years but now you have a new genre of sitcom – Afro British and its set to take over the air waves. It’s an exciting and vibrant new Broadcast quality Sitcom called Meet the Adebanjos (www.meettheadebanjos.com) which is airing online on Sunday 26th June.

For years, popular African-American sitcoms – all the way from the classic Cosby Show to contemporary Girlfriends – have been enjoyed by audiences around the world.

The UK, in particular, has been a consumer of such shows for decades partly because until now, major British networks have not seen fit to create sitcoms based on the experience of black people living in Britain.

But that’s about to change. MTA Productions – a dynamic British production company created by two enterprising 26 year old British Nigerians: Andrew Osayemi, a former trader, and Debra Odutuyo, a TV producer – has decided that it’s now time for the world to watch sitcoms from their perspective: a contemporary black British perspective.

Welcome to Meet The Adebanjo’s, MTA Production’s first sitcom, which is set to air online on Sunday 26th June at www.MeetTheAdebanjos.com. On that day, at least 100,000 viewers from the US and UK are expected to head to the site to officially meet the hilarious Adebanjo family, a fictional British-Nigerian family who will put a new face to British sitcoms and provide the world with a new take on British life.

The independently produced, broadcast-quality show features a cast of loud and unforgettable characters, and highlights the
multi-generational and multi-cultural family dynamics that take place when traditional African/ethnic parents raise British-born children. This is a sitcom which any African born or raising kids in the Diaspora will relate with.

The Meet The Adebanjo’s team is now using the power of social media – Facebook, youtube and their own site – to interact directly with their enthusiastic audience. Already, the show’s trailer – released just one week ago – has commanded over 20,000 youtube views and thousands of positive comments – a strong testament to the untapped need for culture-specific sitcoms which focus on the experience of the Black Briton.

The team is currently urging its fans and supporters to grow the movement by signing up on its website www.meettheadebanjos.com for details of how to watch on 26th June and spreading the word far and wide. Encouragingly, interest has been coming in from Africa and the US, before the first episode has even aired.