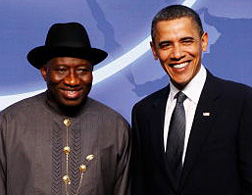 President Barack Obama has invited his Nigerian counterpart President
Goodluck Ebele Azikiwe Jonathan to White House  on official visit
scheduled for June 8th,2011. This is an important invitation and has
strategic implications as President Jonathan commenced to assume
responsibilities as president of Nigeria. This invitation is beyond
drinking of tea and other diplomatic niceties at White House, it is
essentially rested on developing and consolidating relationship for mutual
interest.

As an emerging nation and giant of Africa, Nigeria is playing a vital role
in the continent supplying the largest peace keeping force for peace
making and conflict resolutions in Africa. And with increasing Nigerian
prestige, together with the last successful election, Washington is
extending a solid hand of continuing friendship recognizing quite well
that China is becoming a key business partner in Nigeria and Africa.

Nigeria is the sociological and cultural leader in the African world;
defining and setting trends on what it means to be an African in 21st
century. Most importantly, Nigeria is making waves in scientific
innovations, business, sports and arts with the help of Nigerian Diasporas
in US and around world, together with the help of ever growing and
influential Nollywood .

Nigeria needs United States of America and vice versa. This is a meeting of
mutual respect that will enable a better understanding of the world largest
economy America and a vibrant emerging nation Nigeria.  America needs a
partner in Africa to tackle many issues of trade, terrorism, health and
climate changes. Nigeria with its ample human and natural resources can
able to do it with a well-discipline leadership found in President
Jonathan.

The intrinsic point to make him is that Mr. Jonathan’s hand is
strengthened as a leader democratically elected by the people, as his
mandate came from the consent of the populace. What took place in Nigeria
in the last election gave President Jonathan a resounding victory and it
was anything short of historic. Both local and international observers
accepted the election process and outcome to be relatively free and fair.
Some have even called it the freest and fairest election in Nigeria.

The internal politics and state of affairs of countries are significant
because it becomes a barometer to quantify respect that a president is
accorded by the outsiders especially in this case of Nigeria’s leader
invitation to the White House. It is good for President Jonathan because
he represents a new face of the emerging democratic Nigeria.

President Jonathan  won his election by going to the people and asking for
their votes and mandate; and America respects a leader who understand the
power of the people and who honors the genuine wishes of the people.  In
other means the president coming to Washington is an invitation based on
merit and mutual interest.

The policy makers and leaders of most dynamic democracy, United States will
listen to the words of the Nigerian president for they know quite well
that he is speaking for the entire people of Nigeria for he was truly
elected by the people of Nigeria. The election of a leader by the ballot
papers is very important because it is a mark of advanced civilization and
respect of rule of law.

President Obama knew quite well that President Jonathan is a serious and
discipline leader. When Mr. Jonathan uttered the right words and asked that
nobody should rig for him in the past election. President Jonathan lived
up to his utterance by rejection election riggings and shenanigans. By so
doing he formulated a bright and enriched future for his nation.

At the dawn of 21st century Nigeria needs friends like America who will be
willing to offer a true friendship based on mutual respect as they tackled
African existential problems in particular and global problems in general.
Therefore the second outing of President Jonathan to Washington is a good
thing for it will enable both parties to forge and further a partnership
that will aid to further peace, co-operation, capitalism and democracy in
Nigeria and Africa.