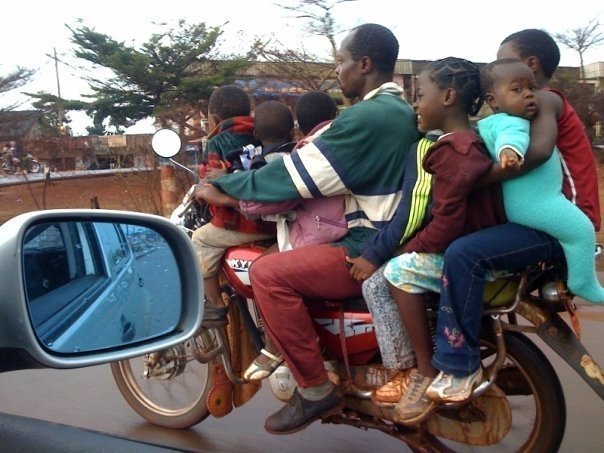 The first automobile was invented in 1769 by Ferdinand Verbiest who created a steam powered vehicle. It was a 65 cm-long scale-model toy for the Chinese Emperor, it was unable to carry a driver or a passenger. Since then automobiles have continued to evolve in design, complexity and functionality. A mid-sized car (not an SUV or limousine) is said to be about 14 feet or 4.26 metres long and slightly more than 2 metres wide. Conventionally, a commercial vehicle (which is usually mid-size) should carry a limit of 5 people viz.:  The driver, one passenger in the front seat and three people at the back.

“Keke” or “Maruwa” as it is commonly called in Lagos is a tricycle automobile that has minimal metal coverings aside from the covering at the back which forms an enclosure that serves as the boot and the covering that protects the front of the automobile. As for the sides, there are two rods that serve as a demarcation between the front row and the back row. The fragile looking automobile which has become very common in Lagos was built to carry four people: The driver and three passengers at the back. It has a length of about 2.3 metres or less and a width of about 1.5 metres i.e. from the protection placed on one tyre to that on the other tyre. From these measurements, the Keke is considerably less than half the area of a vehicle.

In the western world or even in other parts of Nigeria where the above mentioned automobiles are used, the capacity stated for each may be strictly adhered to; but certainly not in Lagos! I remember being in a car with nine people when I was younger, the experience was suffocating. Two people at the front seat and six people at the back, and that’s without counting the two years old that the driver chose to carry in his laps while he was driving. But if you think that’s bad, believe me, you’re not a Lagosian.

The size of the driver’s seat of a keke is not big enough for two people, a passenger who opts to seat with the driver will undoubtedly suffer the consequences of sitting with just one buttock (and that can be discomforting especially for the elderly or for ladies with really big buttocks) or one can sit with one’s back to the driver while his knees stick out of the automobile contraption. The driver also suffers difficulty in turning the steering and adjusting the gear. Carrying a passenger in the front seat would result in the keke carrying five people. Amazingly some Kekes carry up to SEVEN people! How? Simple: Another passenger comes to sit on the other side of the driver.

The first time I had this experience, I had entered the back seat of the keke with two other people while someone shared front the seat with the driver (as is the common practice is Lagos), suddenly this guy (obviously a tout or street urchin) comes to the other side of the driver, asks him to shift a bit and then occupies the “no space” at the driver’s left (which is exactly where the steering wheel is). I was furious! How could a keke which wasn’t even up to half the size of a midsized car carry more passengers than one? Yet no one even said a word, it was just Lagos. As for the last passenger required to make the capacity seven, all you need is for one person to lap someone else in the keke and considering that possibility you could have two people lapping at the back to give a total of eight (and I wouldn’t be a bit surprised if this has ever happened).

Now while all these I have mentioned surprise and infuriate me, the automobile that surprises me beyond SURPRISES remains the popularly known Okada. The Okada is simply the “Nigerian name” for a commercial motorcycle (of course if you’ve visited Lagos at any time in the past eight years you’ve certainly seen them). Okadas are amazing! Beside their ridiculous ability to squeeze through traffic and the extremely high tendency for okada riders to drive as though they have a death wish or a penchant for motor accidents, Okadas in Lagos have a unique ability of carrying loads or goods far beyond the capacity any one could possibility imagine. From carrying 3 bags of rice to carrying up to 5 people (which is just about the full capacity of a car), Okadas are known to do the impossible. Okadas in Lagos have been known to perform unbelievable to near-miraculous feats like the one carrying seven people in the picture on top. HOW?

Well, crazy as it sounds, I believe him. Not that I can imagine it, but I have learnt to always expect the ridiculous in Lagos.

(Watch out for part two on Thursday) 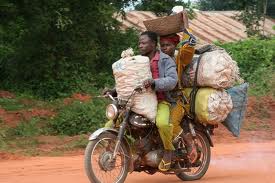